by Pam
Today, we were treated to a much larger finish line boat. It had siesta (nap) written all over it. We had our lunch after the finish of the first race and then all on board had a good nap before the start of the next race. It was a hazy day with alot of slop out there that made for great napping but frustrating sailing.

In the first race, the GMs were misbehaving. The call from the pin boat was "Too. Many" and the committee boat called the fleet back. The offenders were all in the middle of the line. The next start was clean and the rest of the fleets behaved themselves.

While we were busy snoozing on the finish line boat there were lots of horns and I just assumed the second race had started until I started hearing the pin boat calling out numbers. I sat up and realized no one was sailing and shortly thereafter six GMs began the sail of shame, leaving the race course after a black flag and looking a little bewildered. Behave near the pin boat guys.

Al Clark, (CAN) who won the first race with a nice lead got black flagged, Luke Carter (NZL) who had his best race of the regatta with a 2nd, also got tagged, plus 4 others. It hurt to watch.

As you can see in the results, except for the GGM fleet, the leaders in the other fleets had a little competition today. Mark Bethwaite (AUS) in the GGM decided to raise the bar on separation. Mark was a good distance ahead of Doug who was also a good distance ahead of the rest of the fleet. There was so much separation that it is impossible to capture it in a picture. So here's a video.

Insult to injury, Mark arrives at the finish line looking refreshed and relaxed as if he's just had a leisurely afternoon sail. Doug says that Brett says that Mark is doing something called precision steering. He sits perfectly still, doesn't shift his body weight around and simply steers through the waves and doesn't slow down. Something worth learning. 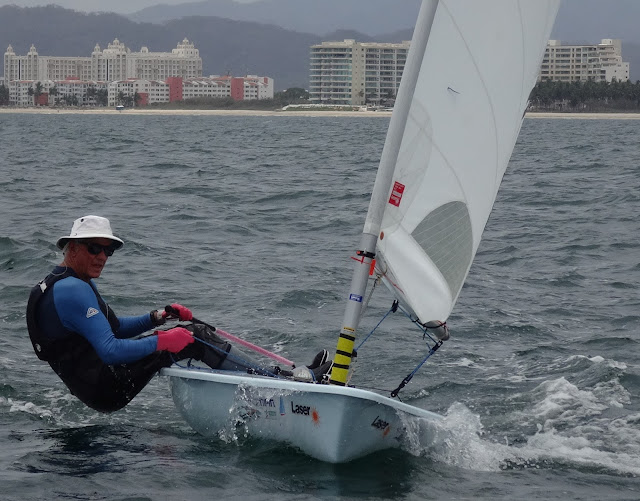 So there was a meeting this evening among the sailors to discuss ideas for building Laser sailing. I didn't attend but listened to Eric Faust talk with Doug for about 5 minutes afterwards. As I understand it, Eric would like to see the entire Master class start together and sail together and then work out the handicap at the end. Personally, details aside, I think it's a good idea and would love to see everyone sail in the same race but the scoring to be done on handicap by age. If you have ideas, send them to Eric Faust (he's going to love me for that suggestion).