No Compass - No Problem 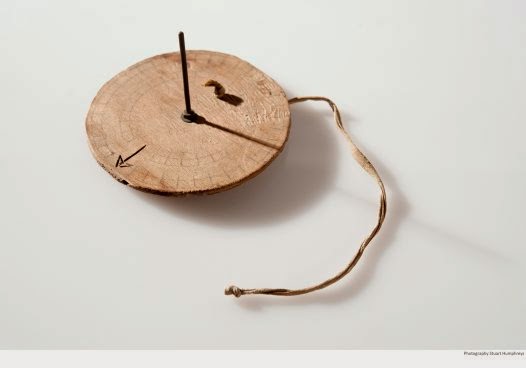 Doug's first post from France was that his bag had been lost in transit. It turns out that it wasn't lost but merely detained in the US by the TSA.

Apparently, they decided his hiking stick, compass, life jacket, hiking pants, vang, and various lines looked like elaborate equipment for some sort of sinister plot. So, the careful packing of his compass inside his life jacket was all for naught. The contents of his bag had been turned inside out and his compass was broken in transit. Fair warning to other sailors traveling. It might not be a bad idea to put a brochure of the event you're headed to along with a picture of the boat and its various equipment inside your bag so security can figure out rather quickly what you're up to.

After Doug's post we received a very helpful email from Mike with a brilliant suggestion. Since there might be other terrorist sailors making their way to France armed with dangerous hiking sticks and compasses, this might come in handy for others whose compasses are lost or broken along the way.

Anyway the important thing is the shadow will only shift 1-2 degrees per leg of a race due to the sun so 5 degrees shifts are detectable.

For a Laser, 5 degrees will be 1 ¾” on the deck edge opposite the mast, so that is probably the resolution of measurement. If the shadow reaches the transom it is about 7” per 5 degrees shift.

The biggest source of error can be heel angle. If the sun is side-on port tack, the shadow will be opposite the mast with a resolution of about 2” per 5 degrees.

Also, on port the shadow will move with pitching, whereas starboard will be insensitive.

Anyway I don’t think about it too hard – I just note the positions of the mast shadow when I’m lifted and knocked on both tacks.

Thanks Mike!  Doug really appreciates you sharing this.

For now, I'm posting and commenting for Doug because Blogger keeps translating everything to French. Hopefully, he'll find a workaround for posting his competition notes.
8 comments:

Email ThisBlogThis!Share to TwitterShare to FacebookShare to Pinterest
Labels: Compass Use

Good news - got to Hyėres and the place where I'm staying is better than expected.

Bad news - none of my sailing gear arrived and has been lost.

Good news - was able to get my charter boat and borrow a sail and rigging for the practice regatta - thank you Regis!

Bad news - Saturday, just made it to the starting line on time, light conditions with lots of chop with the open water. Upwind speed was wasted because I did not have my compass and never got into phase, was spanked by almost everyone.

Good news: practiced with Martin (SWE) after the racing, upwind speed was good.

Good news - got a text that my gear has been found, no details about when it will be delivered.

Bad news - three races in 10-20, sailed again in my 'plane' clothes. When I was practicing in Dallas, the boat felt like an extension of my body. Here in the largest waves for me since Jeju (2006), I really struggled. No hiking pants + no compass = getting spanked, again.

Good news - two days of racing and a long list of things to work on this week.

Bad news - the freight company did not get an answer at my hotel and could not deliver my sailing gear.

Good news - the driver figured it was sporting equipment, saw the yacht club, and stopped to ask if anyone knew me. The office did and my gear was waiting for me after the racing. Thanks to a brilliant driver for the extra effort!!


Bad news - a card in my baggage told me that it was held up in the US by the TSA (Transportation Security Administration) which is responsible for airline security. In going through my gear, they managed to break (open?) my compass.
Good news - repaired my compass and look forward to more practice this week with the many friends who have arrived.
9 comments: 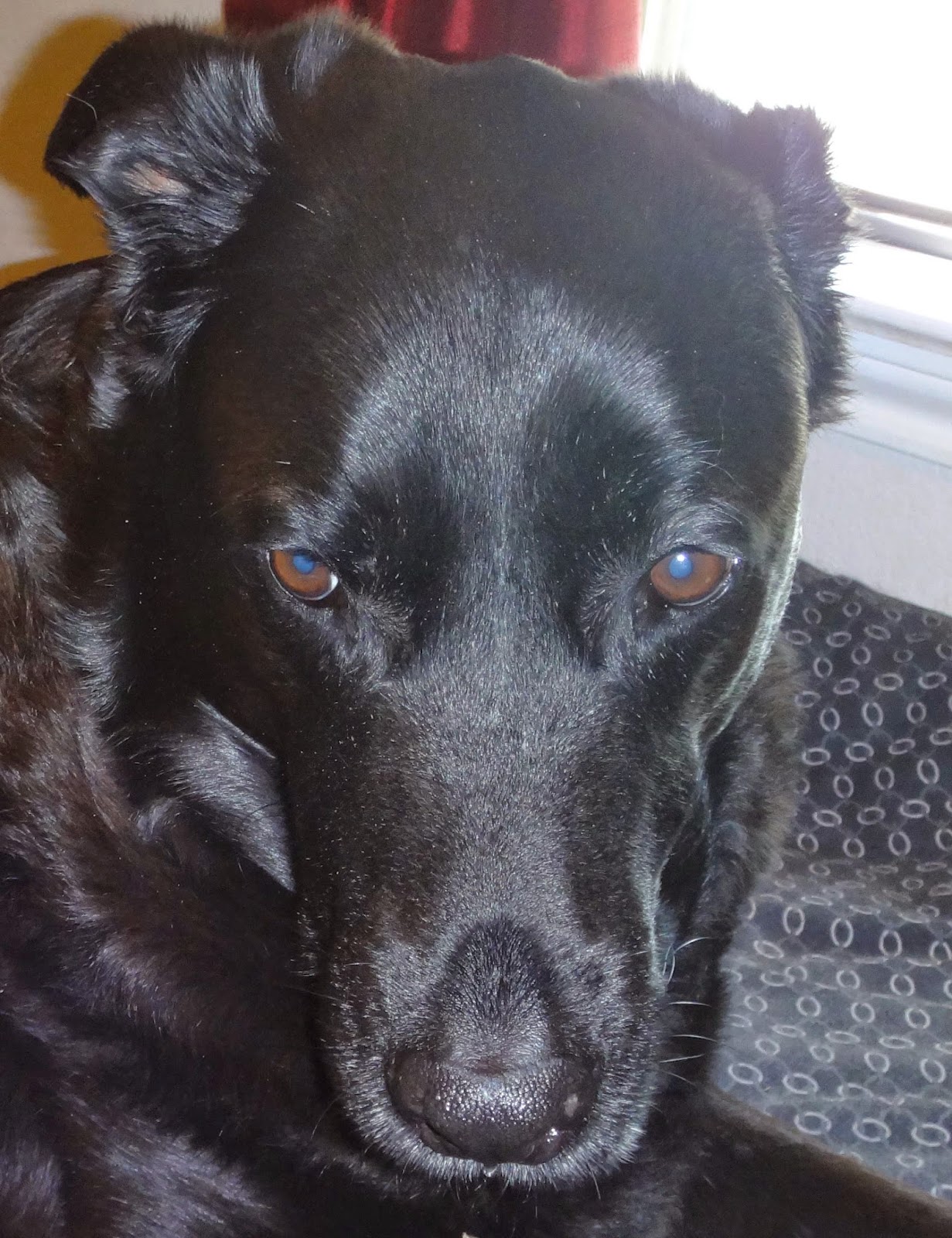 A very special nod to Bear, the 120 pound dog, who was the glue behind Improper Course.

Bear came to me as a foster dog when he was about a year old and a little less than 100 pounds. He had been repeatedly discarded, adopted out and returned until he came to live with me. His legs were scarred from some affliction from the first year of his life and his nose was healed up from what looked like a trauma that had split it open. He reacted badly to loud voices or noises. He was a reflection of the humanity he had encountered in the first year of his life and it wasn't pretty.

After about a month I had to take a two week trip out of the country and since he'd been in quite a few shelters, I left him on a dude ranch where he could roam. When I returned to get him, he caught sight of me and froze. I swear I heard him say "you came back!" as he ran toward me and wrapped his paws around my waist. He adopted me. I became a foster failure.

When Doug was abruptly ejected from his home, I offered him a spare room. I came home from work one day and the two were playing and Doug was singing "Ba-ba-ba-Bear, Bear, Bear, where is the Bear" and I swear I heard Bear say "can we keep him?". Bear adopted Doug. I eventually realized he had chosen well.

We lost our dear boy on Friday to late stage liver disease.  Blood work at his wellness exam in April was perfectly fine. The liver is the one organ in the body that can completely regenerate itself but it can also be 80% to 90% damaged and still function normally so by the time symptoms show up, it's too late.

So, for all you beer drinking and Ibuprofen popping sailors out there ... take your Milk Thistle to keep your liver healthy. We just added it to our daily supplements.

Rest in peace my dear boy ... you were one of a kind.
No comments:

Email ThisBlogThis!Share to TwitterShare to FacebookShare to Pinterest
Labels: Pam's Patter, Where It All Began

by Pam
Four days until the "largest sailing race in the world." Lasers (full rig) have the largest class with over 1,000 boats registered. An unimpressive 21 of those are in the USA. What happened?

Honestly, I'm a bit disappointed. We contacted multiple people and the reactions went from 'never heard of it' to 'sounds like a good cause' quickly followed by lots of reasons why it just wasn't feasible.

I had heard about Bart's Bash earlier in the year but didn't quite get the concept. Over a month ago, I started learning more about it and looking for a venue where we could race in it. That's when I learned that it just hadn't caught on in the USA.

There was definitely a widespread awareness problem in the USA. Even though Jimmy Spithill was registered to do his Bart's Bash in an E-Scow regatta at a USA venue, the club where he was registered didn't begin announcing or advertising the Bart's Bash portion of the event until this past month.

Hopefully, this will become an annual event because there is a lot of room for growth.

In the meantime, it's not too late to make a small donation to the Andrew Simpson Sailing Foundation (click the link below). Bart's Bash is a fundraiser event to help the Foundation continue Bart's legacy of paying it forward.

In the words of Ian Percy:
"We would have had a hard day’s training in whatever country we were in, and we’d have gone to bed and I would sleep almost immediately. Sometimes, though, I’d wake up and hear the tap, tap, tap of a keyboard and I’d ask Bart what he was up to and why he wasn’t going to sleep, and he would just reply, ‘Yeah, I will in a minute, it’s just that (insert name of young sailor here) is having a couple of problems and he/she just needs a little advice.’

Nothing was too much trouble for Bart – he believed passionately in supporting the next generation and he did it because he cared.’

Getting Ready for Hyères - Starting

By Doug
I'm really looking forward to Hyères because with more than 500 entries, it will be competition at its best. I really hope that they do not split up our fleet because having that many boats on the line will be a real challenge and treat.

So, as everyone prepares for the huge fleets, here are some starting thoughts from one of the best - Paul Goodison on his way to winning one of his European Championships.

I've highlighted Paul in green and we'll be watching how he manages his main concern - the boats just above him on the starting line (SWE1, SUI, SWE2).

This sequence begins with Paul in a bit of a jam. 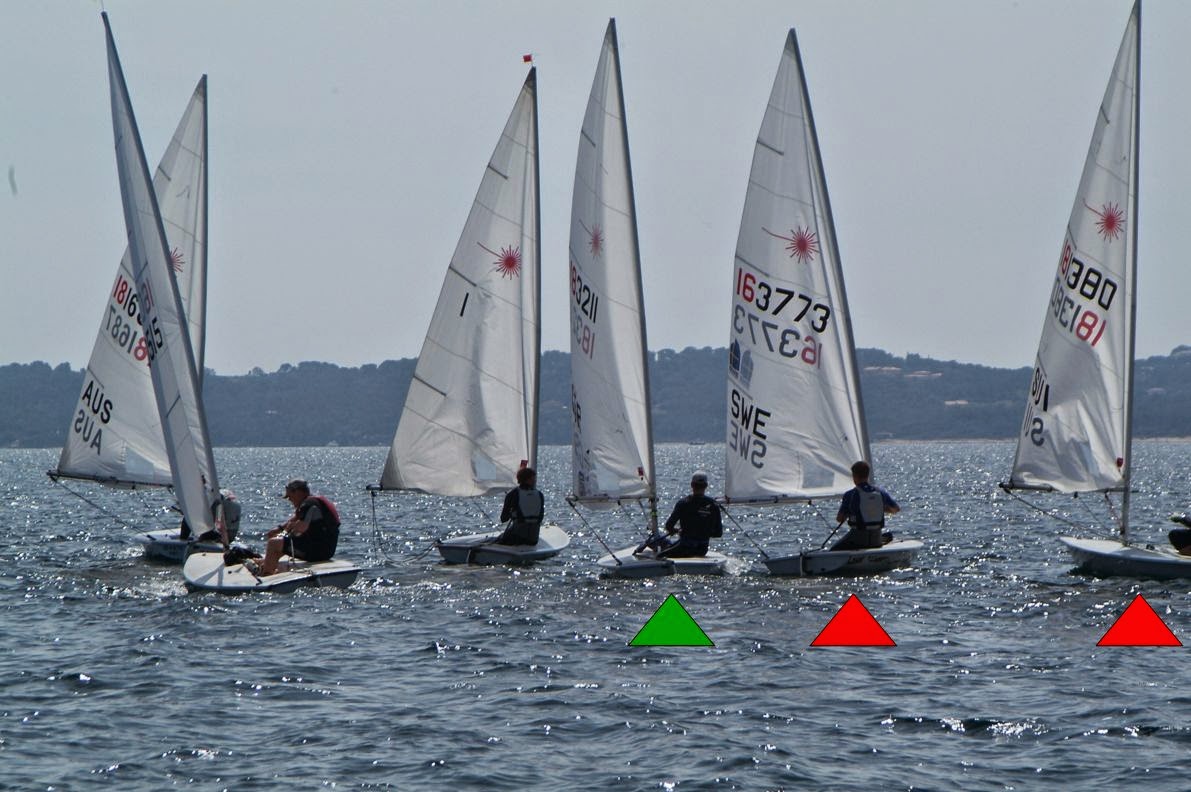 Paul heads up slightly with 30 seconds to go. SWE1 reacts, SUI and SWE2 do not see this. 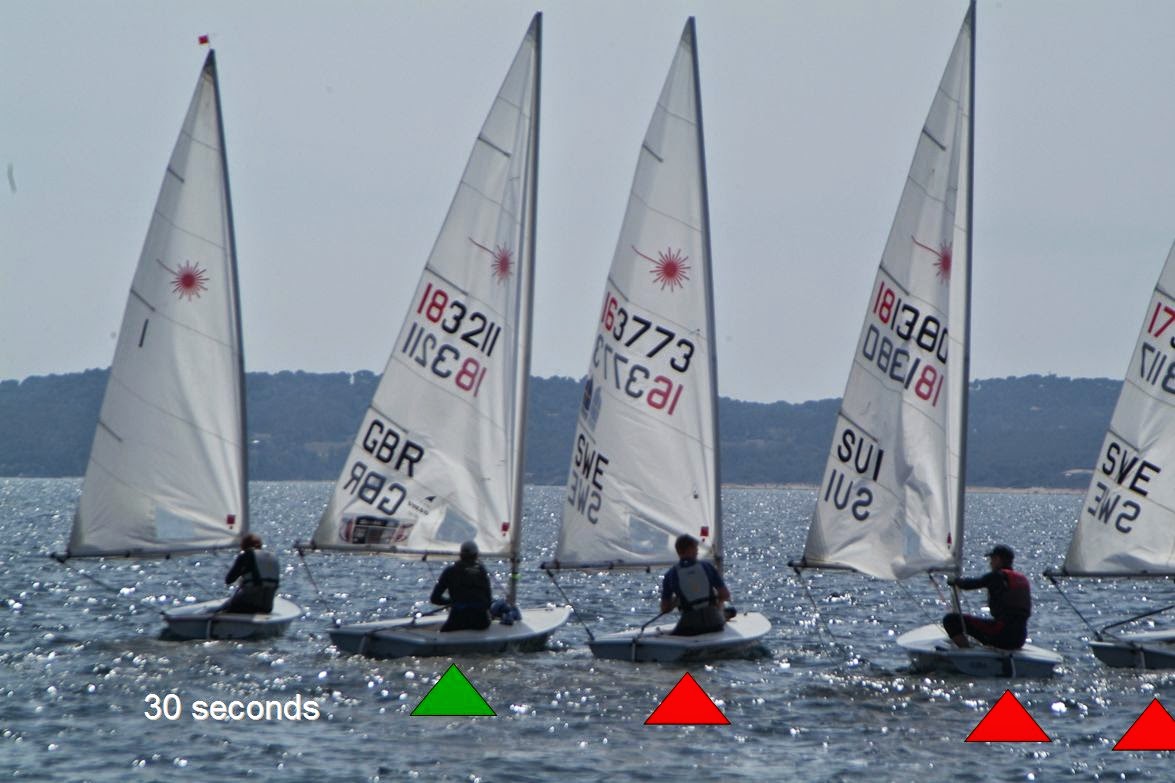 Paul bears off, SWE1 does not, SUI is in trouble, SWE2 is not reacting yet. 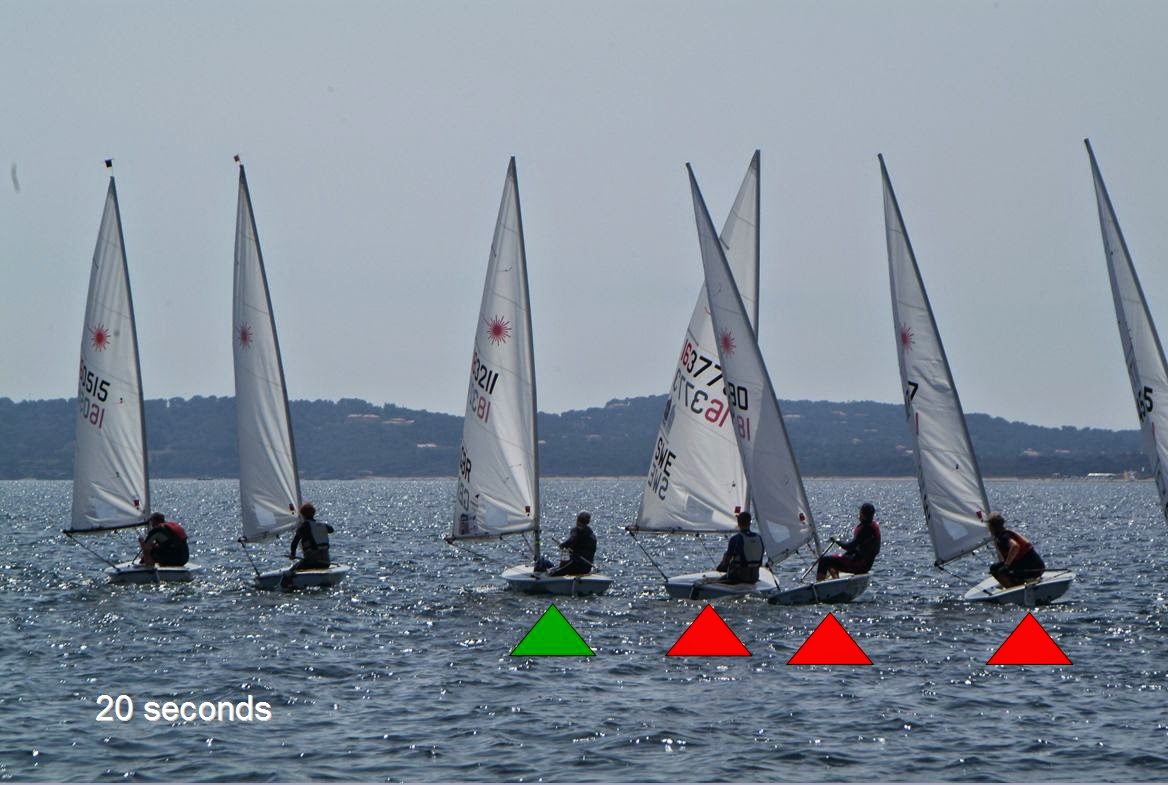 SWE1 is trying to protect against SUI while SWE2 is only now reacting. Paul is sitting pretty. 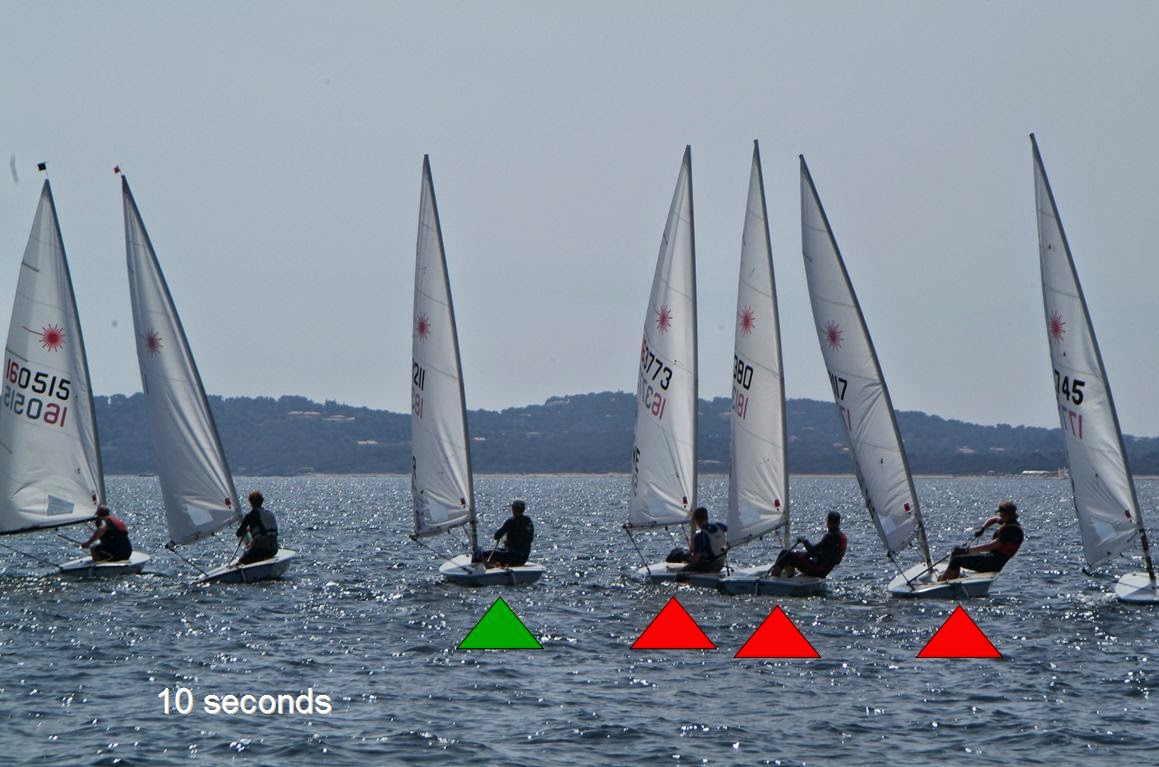 SWE1, SUI, SWE2 are fighting, Paul with a good lane bears off to build speed before the start. 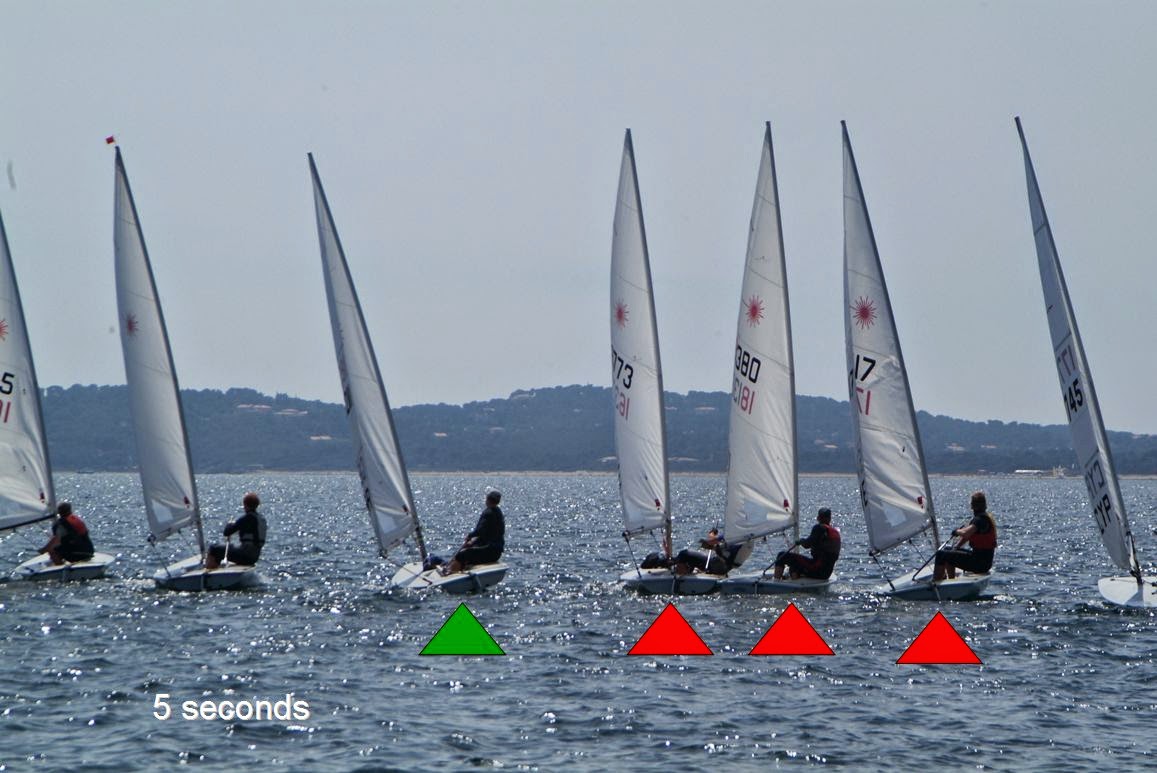 At the gun, Paul flattens to accelerate while SWE1 only now gets ready to accelerate. SUI is trying to hold off SWE2. Note that Paul, with a good lane and speed, is already focusing on what's upwind. 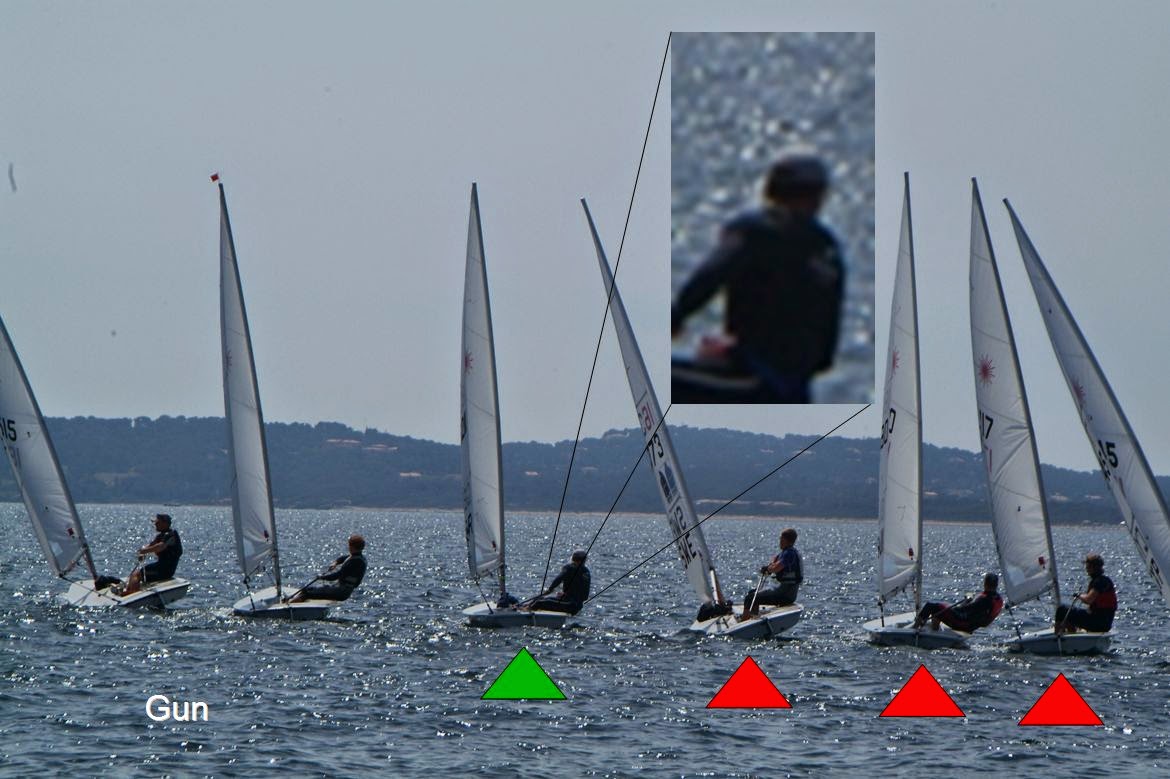 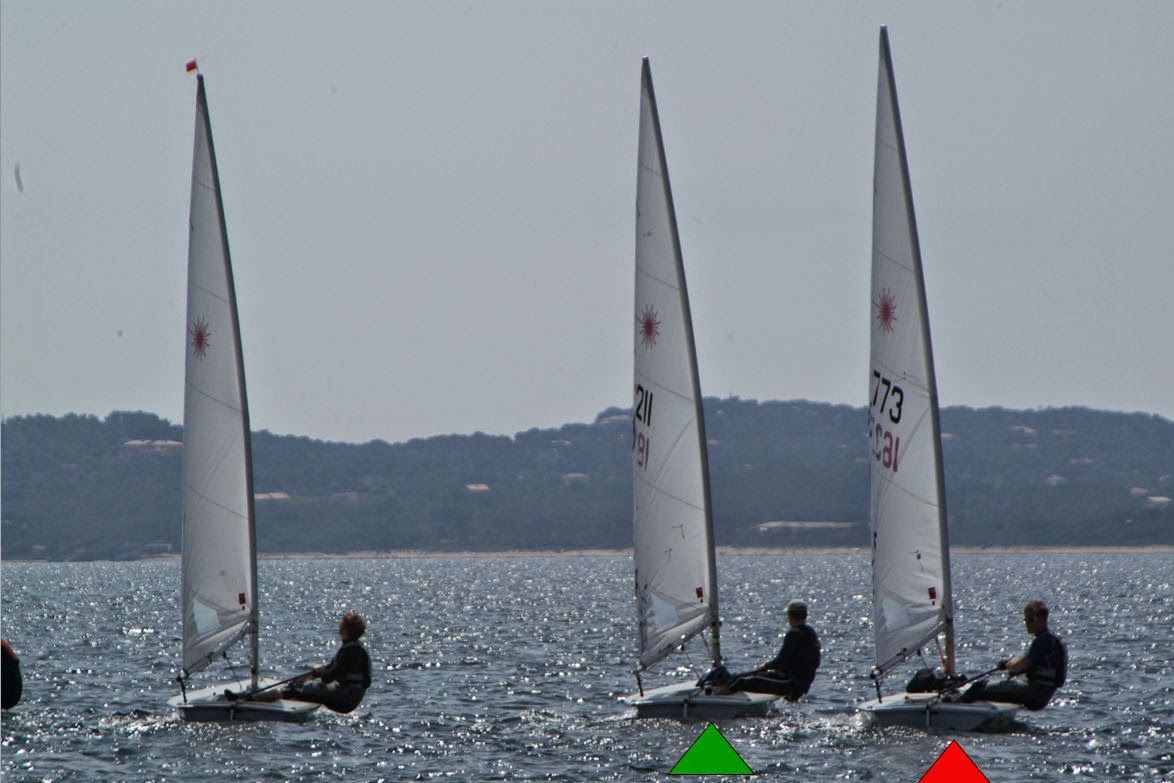 SWE1 looks for a lane to tack into... 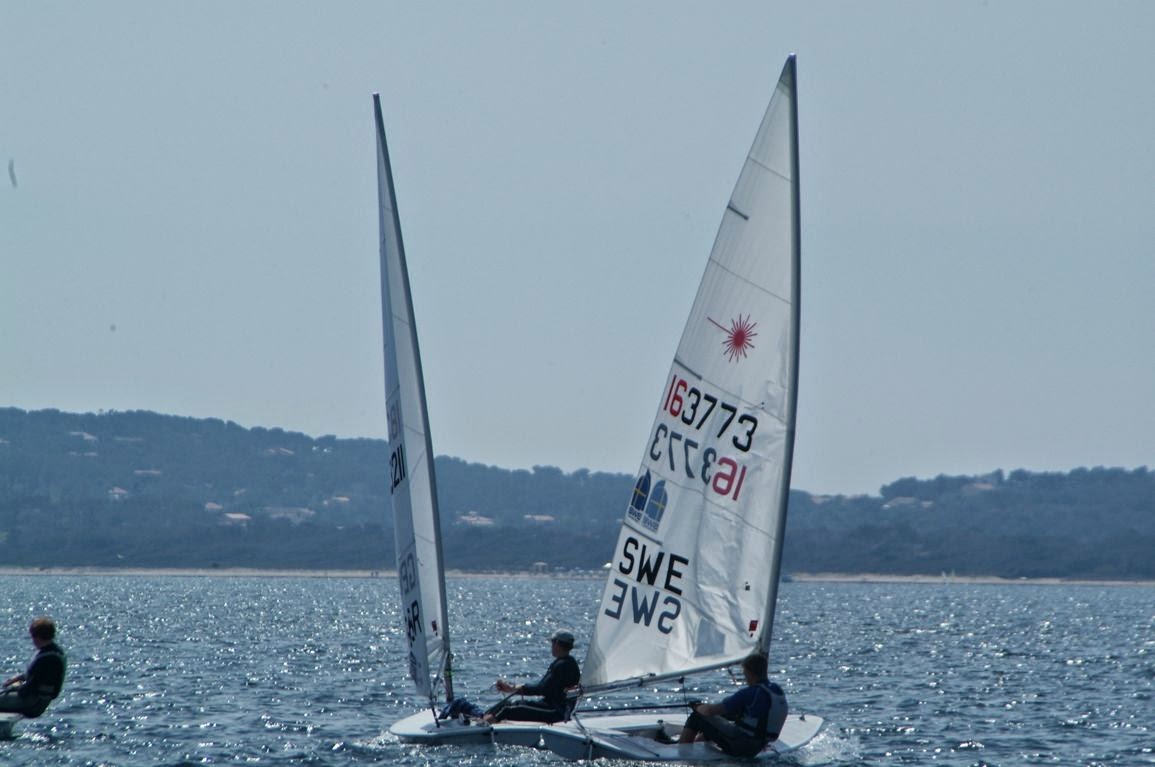 A simple bump-and-go with 30 seconds to go caused the windward boats to defend at the moment when they should have been thinking about ways to be aggressive and accelerate.