When to Tack Revisited 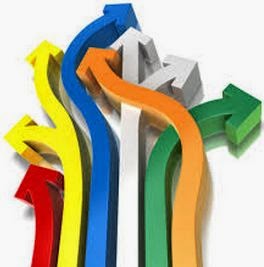 Another talk with Pam and another post. She made a comment that I really wish was correct - about me being good at knowing where to go when sailing upwind. My reaction was boy, I wish that was true.

Many of the international people who I sail against have forgotten more than I will ever know, but this is usually competing in open-water conditions. Because we live in Dallas, I'm much more comfortable on lakes. So with that in mind, here's everything I know about where to go when sailing upwind.

There are a bewildering array of options. To make it more simple, I break them into the Three C's:
A middle-of-the-fleet sailor might interpret this to be "take the tack closest to the mark, watch the leaders, and tack on knocks." This actually works well ... if we have decent speed and want to stay in the middle of the fleet. And this is end of the post if we're happy with that result.

Moving up in the fleet

But there are lots of things that we can do to improve this. And the best way to manage this is knowing when to tack. 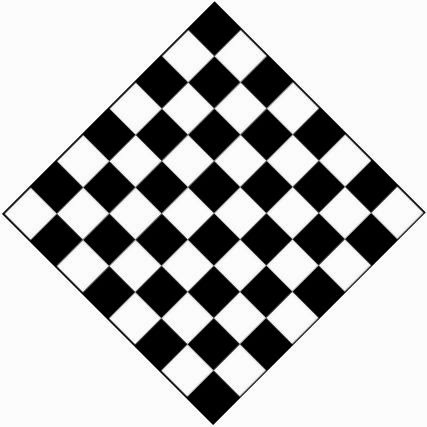 A windward leg is like a chess board tilted 45 degrees. What I find interesting is that a leg that is 1 mile long is also 1 mile wide, so 2 boats banging opposite corners will be up to 1 mile apart! And the conditions for these boats can be very different!

And just like in a game of chess, there are a near-infinite number of choices: bang a corner, play the middle left or right, watch for and try to protect the inside of the next shift, try connect the dots that we see on the water, cover the boat that we want to beat, wait for a Zen moment, etc.

When I was talking with Pam, I kept saying things like "it depends" and "yes, but but keep and eye on such and such." The reason is because it's a combination of sailing the course, the competition, and the conditions. This is where it gets really interesting because the best combination changes as we move up the leg. It's a constant balancing act of where to sail, what are others doing, and what can we see. 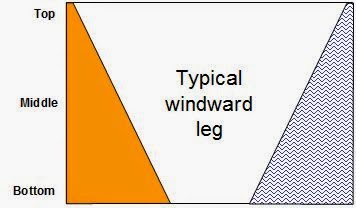 The bottom of the course has all three options and they're more or less equal. As we move up the course, where we can sail gets more and more limited. As we approach the windward mark, the course and conditions become irrelevant because we have no options other than heading for the mark, so sailing the competition is the most important option.

So, here's a typical windward leg: when we start (or round the bottom mark), we want to be on the tack that takes us closest to the weather mark (orange), but we want to also keep an eye on our competition (white). And if there’s obviously more wind on one side, then we want to head for it (blue). We have many ways to adjust our options:
The way we adjust these options is by tacking so we have to continuously decide between not tacking, tacking to head towards the other side of the course, or tacking twice to stay with someone who is giving us dirty air.

Things change as we approach the top of the course as the competition converges to round the mark. It ends up being almost all tactical to keep our air clear as long as possible, to have right-of-way, deciding if it makes sense risking getting greedy at the mark, determining how crowded the layline is likely to be, remembering to get inside the last shift which is always persistent, etc. We have to focus less on the course and conditions as it becomes more and more important to focus on our competition.

1 - Sailing with competition we know is smarter. At the 1997 Master Worlds in Chile, I was up against Mark Bethwaite (now with 8 world championship wins) and Keith Wilkins (now with 13 world championship wins). My strategy to beat these sailors was custom-tailored for these Worlds because I knew that both of these sailors had forgotten more about sailing the course and reading the conditions than I will ever know. So, this was my strategy: 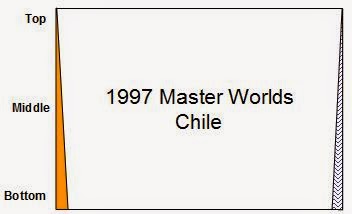 I focused almost all of my attention on where my competition went and then covered them without interfering (as I leaned in Cape Town) so they could teach me. Beating these two world-class sailors was dependent entirely on watching for the little mistakes that everyone makes. For this reason, at world championships I often rely on others to decide when to tack and which side of the course to play.

2 - Sailing with poor vision. Winning my second Laser worlds in Korea was different because Mark and Keith were not there, the current favored staying close to shore on the left side of the course, and I was on my way to being legally blind and could not see the conditions such as the marks and wind patterns on the water. So, my strategy was more about protecting the left side and staying with the competition: 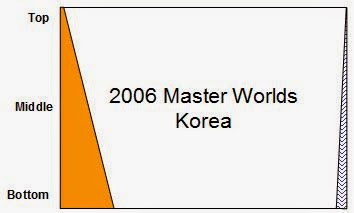 Another important factor is that world championships are held in open water where the wind tends to be steady, so the observed conditions are less important.

3 - When we're 100% sure we know what we're doing (very rare): You may never get to see as amazing an example like this: multiple Olympic and world champion Paul Foerster match-racing at the Pam Am Games which was sailed in J/22's.

In very light conditions, Paul started right on top of his competition and was pulling away when the gun went off. In match racing, we only have to beat the one boat and there was no way this other boat could catch and pass such a skilled sailor. So, what did Paul do? 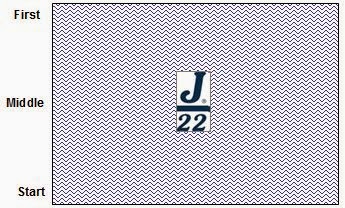 He immediately tacked away, went hard right, and won the race by several minutes. Paul read something on the water or in the clouds that made him sure of the conditions so that the course and competition were not important. Very few people in the world have enough skill and confidence to do this.

4 - Adjusting for the first windward leg: Most fleets go left on the first beat, so the course is not as important as boat speed and staying with the competition. But we still want to protect the right if the conditions there are better: 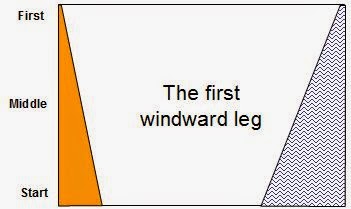 5 - Adjusting for the second and third windward legs: On these, the fleet tends to go right, so the course and conditions are more balanced. But this is not always the case. In one race, I led going into the second beat and the two boats behind me followed going right. No surprises here. Covering the competition is how we protect a lead: 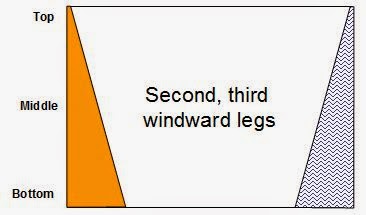 6 - Changing strategies in the middle of a leg: But in that race, the wind shifted more to the right and I wanted to tack, partly because others had tacked and were in a better breeze, and partly because sailing on a big knock was feeling less and less worthwhile than covering the boats immediately behind me. But tacking would have meant not covering and giving my closest competition the separation they would need to catch their own shift or more pressure. So I waited a very long 30 seconds and then decided to tack. Here’s what this leg felt like: 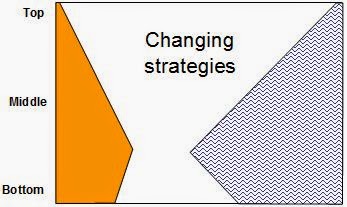 The longer I waited, the less important the closest competition was as the conditions and course options increased in importance and eventually outweighed the feelings of needing to cover. Thankfully, the-leader-must-know-what-he's-doing-mentality worked and the two right behind me tacked to follow. Had they continued going right, they could have found their own right shift or pressure and won the race.

There are many other situations that can be shown with many similar diagrams, and these might be a useful tool for chalk talks after racing.

The key is feeling how much relative importance to put on each of the course, the competition, and the conditions we see on the water. And knowing that in sailboat racing, these options change from race to race and even within the leg of a race.

We have to constantly look around, assess what is happening, and be prepared to tack at any time.
10 comments: 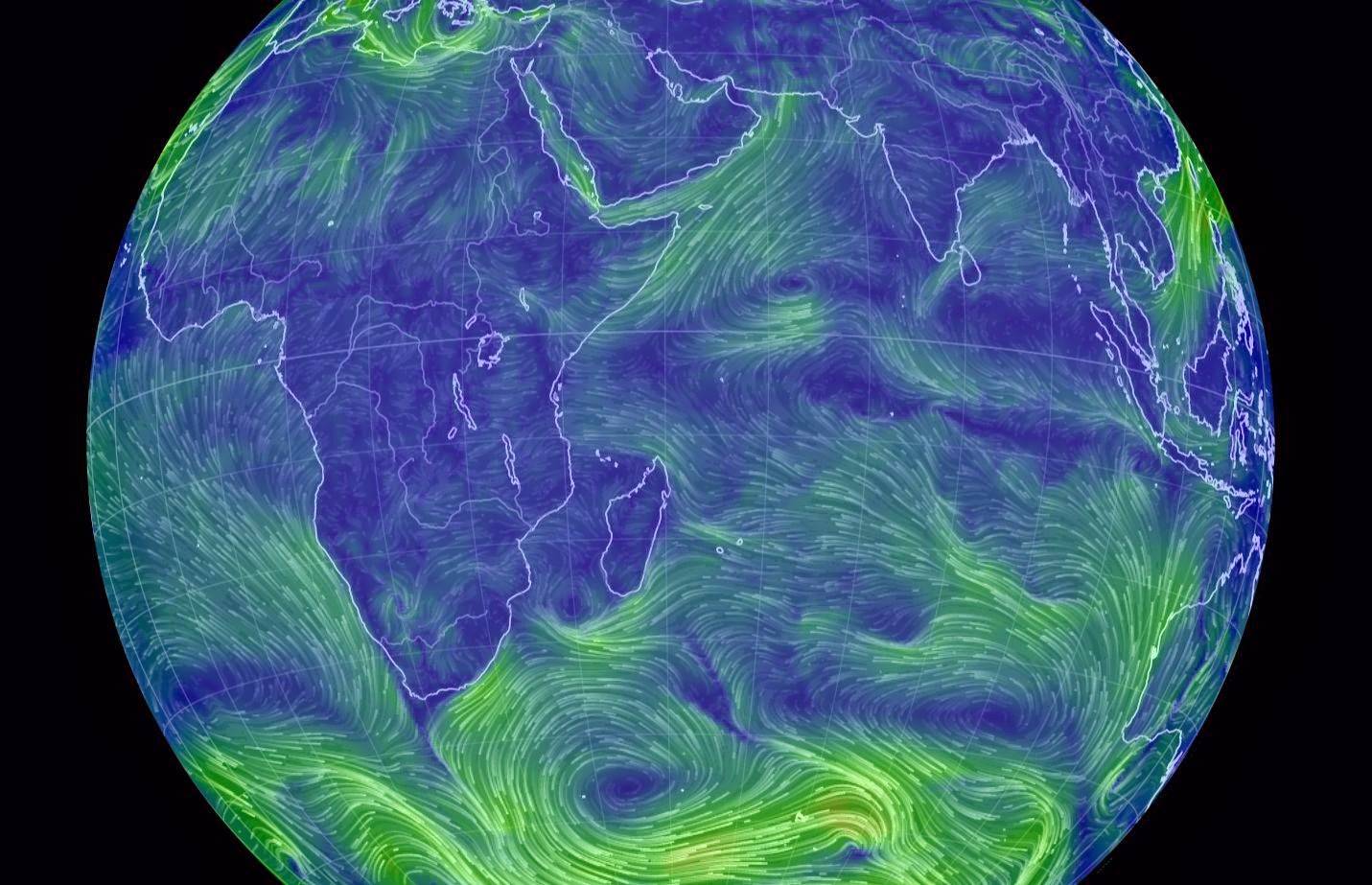 Here's a great site to see the wind patterns in any part of the world. At this moment in the picture, the teams in the Volvo Ocean Race are completing the Cape Town to Abu Dhabi leg and are heading into a stronger northeasterly. Great stuff!
3 comments:

by Pam
The Laser Open and Masters' Worlds will be in Canada in June 2015. Doug is always sharing little "did you knows" about Canada. Did I know that the only war Canada fought on their home soil was against the US ... and they won? Did I know that Canada is the second largest country in the world and has more lakes than the rest of the world's lakes combined? Did I know that the red stripes on the Canadian flag were originally proposed to be blue because they represent the Atlantic and Pacific oceans? And on and on it goes. Canadians are proud and humble and oddly polite creatures.

If you want to see a glimpse of the hospitality that awaits you ... where else in the world but Canada, can you go to a hockey game where the fans finish singing he other team's national anthem (word for word) when the sound cuts off. Doug got all choked up when it saw this. You can take the man out of Canada but you can never take the Canadian out of the man.

For those that want to be prepared to return the gesture ...

Leave It To the Aussies ... 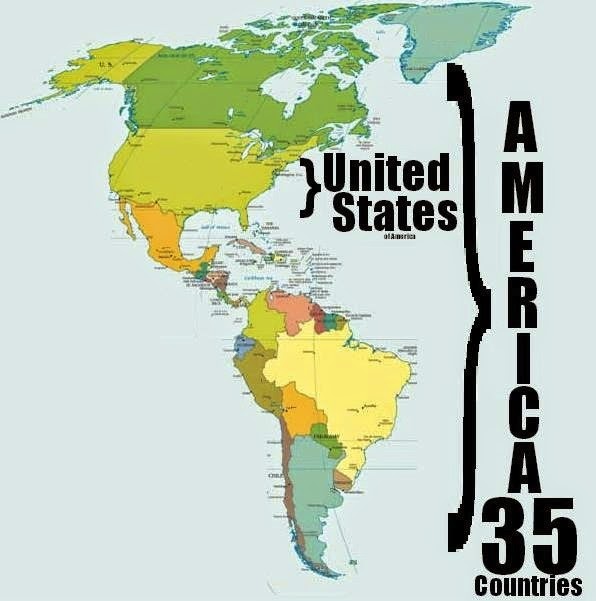 Hmmm ... United States of America. There are lots of theories as to the origins of the name "America" but it appears its first use on a printed map (America's Birth Certificate) was in 1507 and the map was of present day Brazil. When the United States of America was first named in 1776 replacing the name the United Colonies, there were only 13 colonies occupying a small portion of the northeast portion of present day US.

How does the term "American" come to mean a citizen of the United States? Why am I an American and not a USican? Why aren't Canadians and Brazilians also Americans?  Technically, they are, aren't they? It's not like the US even occupies the largest portion of North America, let alone America. How can the the citizens of the US essentially claim ownership of the entire continent by just declaring that they are Americans?

I think the Aussies nailed it. I spent a few days on the Race Committee finish line boat at the Brisbane Masters' Worlds and thoroughly enjoyed everyone on board. I can't remember what I said or did but I jokingly earned the name 'Damn American.' In hindsight, I realize that in the minds of many, that pretty accurately narrows it down to a US citizen.
10 comments: