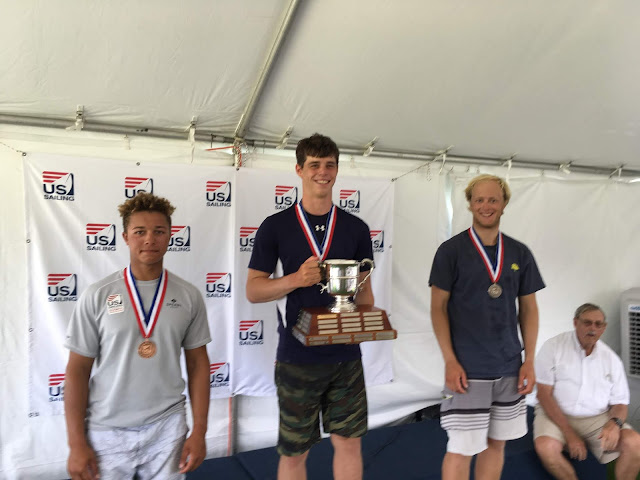 By Doug
The combined Laser U.S. Nationals and U.S. Singlehanded Sailing Championship were held last weekend at Houston Yacht Club. It's been years since I sailed in an open national championship so I decided to compete knowing that it would be a learning and humbling experience.

The forecast was for light winds but that was totally wrong - most of the 9 races had gusts between 15 and 20 knots. My starts were good but my lack of sailing in open water and my lack of being in top shape took their toll. The leaders consistently finished 2 minutes ahead of me on the 60 minute course.

There were sailors from half a dozen countries and the winner was Malcolm Lamphere from Lake Geneva Yacht Club and Chicago Yacht Club. Malcolm put on a clinic and won 7 of the 9 races. I was able to watch him on the third day and he was simply the fastest upwind. Usually speed like that comes from being in shape and having additional body movements, but I did not see any difference with how he was sailing. It was very impressive and as expected, very humbling.

Malcolm recently graduated from Yale and will be training full time for the next 2 years for the Olympics. Here's how he trained for this event and how he plans to continue his training.