by Pam
This regatta was both the Sunfish and Laser final circuit stops for the year. The Sunfish had a fleet of 38 boats. Woohoo! Sadly, only a handful of Lasers registered for the regatta and they all decided to switch to the Sunfish leaving no Lasers to sail in the last circuit stop. However, this made for some good competition on the Fish course.
J. Roy won the Laser circuit.
No comments: 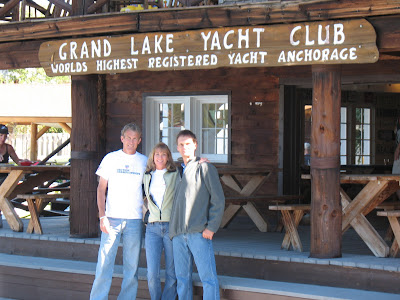 Doug and I headed north to cooler temperatures this past weekend to compete in the Colorado Laser State Championships in Grand Lake, Colorado. While there we connected with Jim Young and dropped off a carload of Butterfly trophies for the Single Handed Butterfly Nationals being held in Longmont, Colorado in September.
This was Doug’s show and I was along for the ride. Doug gave a clinic on Friday and then raced on Saturday and Sunday. The clinic was well received and there were two full days of racing with the race committee getting in 7 good races. Doug took 2nd and John Miller, a fellow from Kansas who Doug has been loosely mentoring, took 1st. John sailed extremely well and went home feeling quite good about the weekend and Doug was thrilled to see how good he’s gotten.
I raced double-handed with my brother on Saturday and by Sunday we’d been in the 50 degree water at least twice each and had righted the boat both the traditional jump on the centerboard way and the way Doug recommended which was to pull the boat over on you, turtle the boat and bring the sail all the way through a 360 degree rotation. The 360 roll was surprisingly efficient. Staying on the boat would have been better though. One word of caution. When pulling the boat over on you, it’s probably a good idea to check the surrounding traffic. We learned later that the guy that called starboard and made us turn sharply, narrowly missed being struck by the mast. For some reason that made me smile. By Sunday, my brother and I hurt in places we didn’t know we had and decided not to race. 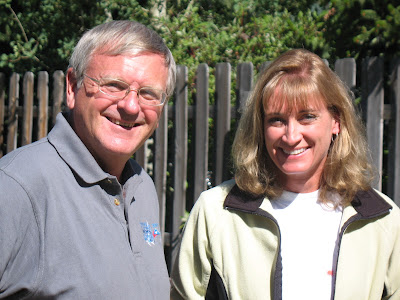 Perhaps the best part of the trip was Sunday’s racing. Doug got pushed over the line and had to re-start then got called back because it was an around the end re-start so after he started for the third time, he was in last place a minute and a half behind the fleet. Not surprisingly (anymore), he worked his way through the fleet to a 2nd place. There is a knowledge in that man’s head that I am determined to access and share. I sat with Jim Young for the second race and he gave me a play by play of the race. What a privilege. He sees and anticipates so much. He seems to be a great coach. I wished I’d had a tape recorder or video. It’s such a pleasure to watch a race with a pro and have them tell you what they see.
No comments:

The recent Gulf Coast Laser regatta at Seabrook was quite the event with approximately 120 boats sailing in the event. More than 50 boats registered at the last minute the morning of the event. Can you imagine scrambling to accomodate an extra 50 boats. What an outstanding accomplishment. Good for Seabrook to draw that many boats before their rebuilding efforts were complete.
Seabrook's Facebook page has pictures of the event and the rebuilding:

by Pam
Be sure to check out the link to the Laser Gulf Coast pictures below. Little ole Seabrook had about 50 extra boats register the day of the event. Lasers were everywhere. Now it's TCYC's turn and there are even more boats.
Sailgroove has now teamed up with laser.org and there are live updates and videos beign posted for the North Americans.
Results
http://www.sailgroove.org/videos/coverage/view/237207-2010-laser-north-american-championship
http://www.lasernorthamericans.com/
No comments:

by Pam
Pictures
Standard Results - 39 entrants
Radial Results - 64 entrants
4.7 Results - 19 entrants
What a great event for Seabrook to host in its efforts to rebuild. Several local sailors (and possibly familiar names) went down to complete in the full rig, scoring 7, 14, 22, and 27. In second place, was the young rock star that Doug went down to play with in Corpus a couple of weekends ago. Doug thinks he might have learned his special go fast technique. Maybe, he can teach us. Something about carving downwind (and being in your early 20s doesn't hurt).
On the not such great news front ... keep your ears open: Stolen Laser - Sail #188969
No comments: 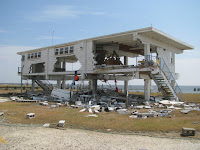 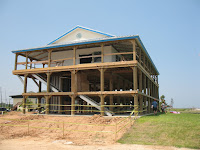 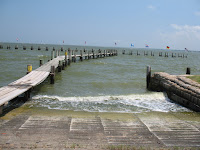 A couple of Dallas/Fort Worth sailors, Doug and James, headed south to Seabrook Sailing Club for a Laser circuit stop to show their support of their rebuilding efforts. The first picture shows the damage from Hurricane Ike and the other two show the rebuilding efforts as of Sunday. There was a good showing of Lasers with several young rock stars arriving early and using the event to train for the upcoming Gulf Coast and North American Championships being held the last two weeks of June.
Last year Mark Eldred traveled to WRBC to sail in the Wrangle and won it. This year Doug reciprocated by traveling to Houston to sail at Seabrook. There was some very good competition and Doug and James came back with a 3rd and 5th. James got to enjoy what it's like to travel with Doug and pick his brain playing 101 sailing questions. Doug, on the other hand, got schooled by the young guns at the regatta. The cross pollination continues. The next generation of Laser sailors are wicked quick and will certainly up the game.
Note that Seabrook's new club will have an elevator so the old Masters can get up to the clubhouse after sailing.
No comments: 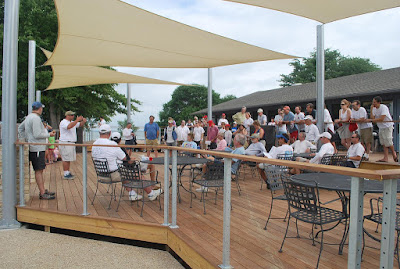 Laser and Sunfish circuit stop at Rush Creek Yacht Club. It was mainly a Fish event with 31 Fish and only 7 Lasers. We had an abundance of windage and flippage. Doug often says he's a one trick pony (meaning a Laser) and I learned this weekend that when the wind kicks up, I'm a one race pony. Time to hit the gym. By Race 3 I hit a brick wall and Doug was kind enough to escort me back to the docks and then we sailed double-handed on the Fish for the rest of the regatta. Tacks and gybes were challenging and sloppy and we turtled and swam twice. Slow.
Those that stayed on the course simply amazed me at their strength, determination and talent. I felt like an observer in the middle of greatness with bunches of role models around me. That's not to say that I didn't also admire the sanity of those that stayed on shore or returned and chose not to abuse their bodies. I'm pretty sure I'll be grunting, groaning and saying ouch for the next week.
No comments:

Doug 2nd and becomes oldest sailor in event's history to win a race at the Easter Regatta.
No comments: