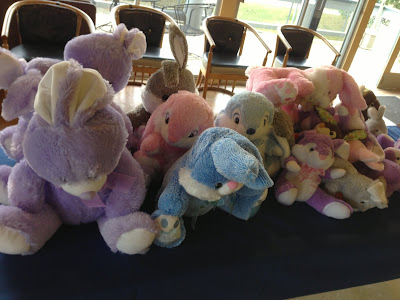 For 30 years now, Fred Schroth has personally sponsored the annual Easter Laser Regatta.  It’s always the kick off event for Laser District 15 and it’s always the best attended district event all year.  The Texas weather cooperates every year with a nice variety of unpredictability.  A little wind (or sometimes a lot), a nice sunny weekend (or maybe a little fog, rain or sleet), and a nice full lake (or not).  The NOR is posted years in advance, the date is always locked in and just about everyone goes home with a stuffed bunny trophy which kids (and dogs) always appreciate.

Being blissfully content and exhausted from my new job, I opted for a sideline position this weekend.  It would appear that either I suck at cheerleading or Doug, being the oldest sailor on the course, is beginning to act his age.  They say that as you get older, the brain gets full and some of the earlier things that you learned, you begin to forget.  We’re going to have to start back to basics with Doug on knot tying because the knot in his mainsheet came undone and unthreaded in, not one, but two races.  Then, he was called with Fred’s UHS penalty (unfair head start) and found himself so far back he was actually sailing with folks in the Dallas fleet (sorry … couldn’t resist a little smack talk … see Tillerman’s Rule #5).  Despite everything, Doug salvaged a 4th overall, being almost 10 years older than the 1st place competitor and over 45 years older the the 5th place competitor.

Here's Doug with some on the water interviews from the top 3 boats as well as Fred himself, in all his glory.

This first video is from Ravi who finished third. He describes an interesting way to connect the dots when sailing in a light, patchy breeze:

This is Chris who finished second. Here, he talks about his starts:

This is Scott, who won the event. Here he describes several things like his starts and how to manage wind direction and pressure on Lake Travis. The wind was picking up so the sound with my iPhone got crappy, but there's some really good advice from this multiple Master NA winner:

I'm excited to note that the last part of this video has me going faster than Scott ... the only time all weekend.

But perhaps the best part is the awards by Fred himself, who makes sure that everyone gets something. One year, a fellow broke his mast, so Fred (smack!) broke a candy bar and tossed it to him. Here's just a small part of Fred in action:


The Easter Regatta is a great event and a tribute to Fred who makes it well worth the trip. In this final video, Fred explains its origins: