When I was in my 20's living in , Frank Bethwaite asked for my help with his wind tunnel testing as he explored wing masts for the Little Americas Cup. Frank was sure that two wings working together would generate more lift than just one.  It was absolutely fascinating stuff. Forty years later, his design has proved to be correct and has been widely adopted.

Something else Frank talked about at the time was what he called the "Concertina effect" where the wind characteristics change as the velocity changes. Here's an example from a weather station: The wind is steady from the south until it drops and becomes unstable, and then becomes steady again when the wind picks up. Here are more pronounced examples: 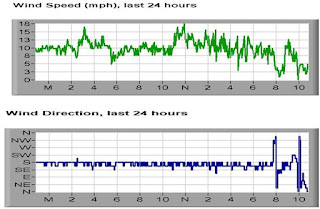 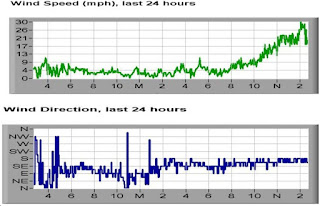 What we are seeing is that wind up high slows down when it hits any surface, and the more it slows down the more it zigzags. Traffic also does this - when a car stops suddenly others swerve out of the way. You can also see this with molasses slowing down - it does not stop evenly but zigzags back and forth.

The more something slows down, the more it moves back and forth. This is why the light wind is shiftier than a stronger breeze. And why the Cheat Sheet refers to sailing in a light wind as having to "be smart." In these conditions, I would rather sail an old, beaten-up Laser and be aware of my surroundings than have a fast Laser keeping my head inside the boat. So, the first tip for being smart is feeling and seeing the wind.

My years of sailing have taught me to be aware of where the wind is coming from and how it is constantly shifting. Pam and I play this game when outdoors about what the wind is doing and she's getting good at feeling it. On the water I like to wear as little as possible to get the best feeling. Sometimes the wind is so light there are no clues on the water or on the boat about its direction. What I do is close my eyes and move my head until both sides of my face feel the same, and then open my eyes facing upwind. And because of Frank's Concertina effect, I know it will change again soon.

Sailing in really light winds can be frustrating, but knowing where the wind is coming from and knowing it's constantly changing will give you a huge advantage. It's not my favorite part of sailing, but having this advantage makes it a lot more fun.