Back to my cheat sheet and a trick that I used at a national championship sailed in another class at Lake Lotawana, a small lake near Kansas City. There were wind lanes coming down the lake, but you could not see them by looking at the patterns on the water. So I tried something a little different.

When we're sailing upwind, you normally look ahead at the sail or over your forward shoulder at the wind, waves, and next mark. Occasionally, you'll look backwards to see what the boats behind you are doing. What's missing from this picture? 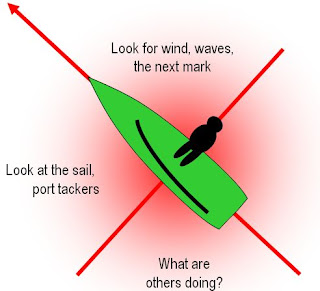 We hardly ever look over our trailing or "wrong shoulder" because there's not much going on. But at Lake Lotawana, there was a lot. Whenever I was headed and wanted to tack, I looked over my wrong shoulder and asked myself this question: are the boats there going at least as fast as me? If the answer was yes, then I tacked. If the answer was no, then I sailed through the header. The other boats that tacked on these headers sailed right into less wind and slowed down. It was much better to stay in the pressure even when headed. This is especially important when the wind is light and you have to "be smart."

This was my first major event in this class and others were definitely faster. But using this one trick to always stay in the pressure, I was fortunate to score five bullets and threw out a second. For me in these conditions, looking over my wrong shoulder worked like a charm.