by Pam
Updated version can be found here The Kirby Sailboat - Take Two.  Don't bother to read this unless you're just curious.

Tillerman's recent post on Proper Course and a conversation with a sailor this past weekend motivated me to find some answers to questions no one seems to know the answer to and everyone seems to be talking circles around.

So, since I spend my days looking up details of patents and trademarks, I figured I was uniquely qualified to do some digging.  Not only did I find the answers, I formed a theory as to what the heck is really going on.  It's just a theory so don't go quoting me because I don't have any inside information and I'm basing my theories on some minor experience with such matters.  So, let's just jump right in.

Bruce Kirby has two US design patents and they are public information.  Both have expired.  Now judge for yourself on whether either of these patents covered the Laser (click on the image to make it bigger): 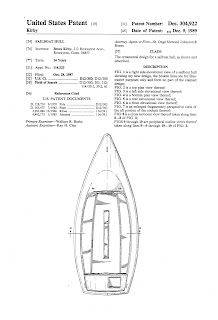 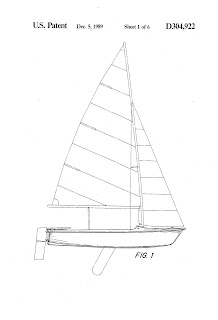 A jib?  Doesn't look like a Laser to me. 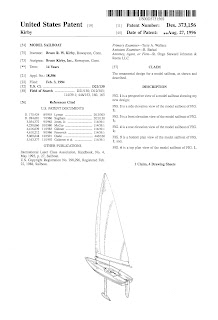 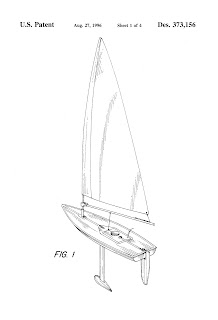 A keel?  And the title says is "Model Sailboat"?

Okay, two strikes.  Those aren't Lasers.  My search included all the major patent offices and I even used the fancy search software that patent attorneys use.  Bruce Kirby had said the building contract rights weren't based on copyrights (he probably meant 'patents') and the ILCA said the Kirby contracts were based on 'certain aspects' of patents that had recently expired.

Actually, I think they were both speaking their version of the truth.  Bruce, knowing his rights were based on contracts and not intellectual property patents, trademarks or copyrights.  The ILCA, citing that the patent rights had recently expired (the second design patent above expired in August of 2010).  Also, check out this patent attorney's explanation of stools vs. chairs and the infringement possibilities between the two (http://www.patentlight.com/?p=41).  Those darn patent attorneys can make a case for just about anything and they probably saw the design similarities in the model and the Laser and assumed the building contracts (which the ILCA admitted to not having seen) might somehow have been based on a patent right.  I'm betting against the patent licensing/infringement/expiration thing being a factor and believing the right to build the boat was based on the building contracts which related to hull molds, design specifications, etc.

Now, let's move on to trademark rights.  I've heard people say that Kirby lost or sold his trademark rights.  Not so.  I checked the trademark offices of the US, CA, EU, and AU.  Kirby never filed for trademark coverage of "LASER".  All the initial filings were by Performance Sailcraft (Inc. in the US & CA, Pty. Ltd. in AU, Europe Limited in the EU).  Kirby had said the official name of the boat was the 'Kirby Sailboat.'  That seems plausible since the actual building contracts (which I don't know anything about) should be about the hull design and specifications of the boat he called the 'Kirby Sailboat' but it would make sense to give the contracting parties the right to call it something else and they chose "Laser."

Now, here's an interesting twist.  The US and CA have this super long transactional history of the ownership of the LASER trademark rights changing several times with it now being owned by Karaya (Jersey) Limited as of December 14, 2011 but the Assignment was back dated to January 1, 2009.  I think Karaya is somehow linked to LaserPerformance but I didn't bother to follow that up.  In AU, the LASER trademark owner is still Performance Sailcraft Pty. Ltd. and as of June 29, 2010 they filed for about a half dozen more variations of the LASER trademark, all of which will issue as registered trademarks on September 29, 2012.  I'm not completely familiar with using the EU searching function but it appears the trademark owner in the EU is Performance Sailcraft Europe Limited.

So, assuming that Bruce Kirby didn't have patent or trademark rights all this time, it would make sense that the building contracts covered Kirby's "trade secrets" and that is what was contracted for.  Trade secrets aren't public information and they never expire.  I read somewhere that Kirby indicated one of the parties owed him alot of money which created the contract dispute that the ILCA jumped into the middle of.  It's only a guess on my part, but I've worked for companies that licensed their intellectual property to larger companies and at some point there is always a routine tipping point where the big dog in the fight decides to stop paying royalties and keep all the money for themselves since it is cheaper to fight in court than it is to pay royalties.

Now, what creates that tipping point is anyone guess.  A scheduled renegotiation point in the contract in which one or both of the parties want a bigger piece.  Who is to say.

Now go out and look at the manufacturer tag on your boat.  It lists 3 parties - the ILCA, Bruce Kirby, Inc. and the trademark owner.

Bruce Kirby owns the trade secrets for the Laser design (the Kirby Sailboat) and always will.  The manufacturers own the rights to the "LASER" trademark but not the boat design.  The ILCA just changed the class rules to say that the Laser no longer has to be the originally designed Kirby Sailboat.  What a mess.

Of course, it's possible, I'm completely wrong.  But perhaps I've added a few missing pieces to the puzzle and people with more knowledge than me can connect the dots so that they make more sense.

UPDATE:  So let me see if I have this straight ...

ILCA Action
“The lawyers also informed us that the Kirby design patents had in fact expired. Therefore, we are proposing to change the rule to eliminate the “building agreement from Bruce Kirby or Bruce Kirby Inc.” requirement. Manufacturers who have trademark rights and who build in strict adherence to the ILCA Rules and to the Construction Manual, which is controlled by ILCA, will continue to have the right to build Class legal boats."

Uh ... correct me if I'm wrong but my thoughts are ... there was never a patent ... the design rights didn’t expire and are now controlled by BKI. ILCA’s rule change (if ratified) attempts to authorize the manufacturers to build a boat the manufacturers have no legal right to build without a contract and the ILCA has no legal right to authorize. Oh, they can probably build it and the ILCA can give it their stamp of approval ... and it might be class legal ... but it isn’t legal.