We end the "be smart" light air sailing with another example. The 1992 U.S. Laser Masters was held in Moosehead Lake in upstate . If you can find it on the map, you'll see that it's about as remote a sailing spot as you can get. But what a fantastic place to sail! In a competitive fleet, I found myself in the unenviable position of having to win the final two races to win the event. So, it was time to get creative and take some risks. There's an extreme case of not sailing the course or the competition.

I'm green on the starboard tack lay line with boats ahead and below. There's a tempting but stationary puff to the right, off the course. I decided to tack away from the mark and competition to get into the breeze and then tack again to come back on a hotter angle to the mark. A fellow behind me said it was strange to watch and thankfully, it worked. 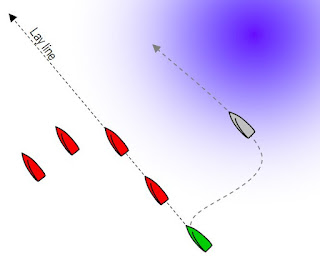 So, would I have tried this without the need to take risks? It would have been very tempting because in light air I prefer to stay in the pressure, but then I also prefer to stay with the competition. So I guess it was a tossup and this time, it worked.