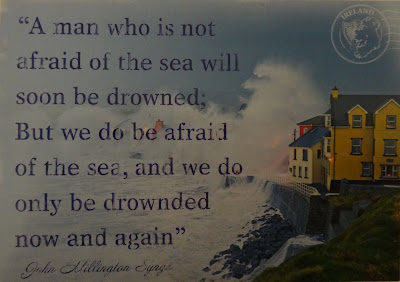 There were several Laser Master World's regulars who opted out of the Worlds this year believing that Ireland would be a tough venue. They were right.  But I am glad we are here.

Results, news, and pictures are readily available so there is no need for me to try to provide any of that.

We are learning that Ireland is not for the weak.  From colds going around to capsizes, rescues, abandoned boats, injuries, and ambulances, there is a whole gamut of emotions but I think humility tops the list for most.  Some are thriving but most are surviving.

A photo was posted by the event photographer, David Branigan (Oceansport), which I thought was a fantastic photo of Brett Beyer leading the pack.  As the last boats were finishing on Tuesday and I had not seen Doug cross the line, I began to panic, bouncing around the boat, frantically searching for him.  Then, he appeared from behind the mast, second to last boat on the course, missing his hat.  I waited patiently for him to finish, he turned and gave me the thumbs up, and I my heart started beating again. Then a picture appeared before me that gave me the giggles.  It was the exact opposite of the Brett photo ... see for yourself.

I woke up on Tuesday with my first cold in over two years and then got to sit on the deck of the finish line boat, in the rain, taking scores.  Doug and I used our lay day to actually rest.  We did sneak out to see the sun for a bit today and I tried my first Hot Irish Whiskey which I highly recommend for my fellow cold sufferers.  We have a tour booked after the sailing ends so we'll see the sights then.