by Pam
The practice day bought light winds that left some sailors bobbing about on the water and scrambling for a tow in. 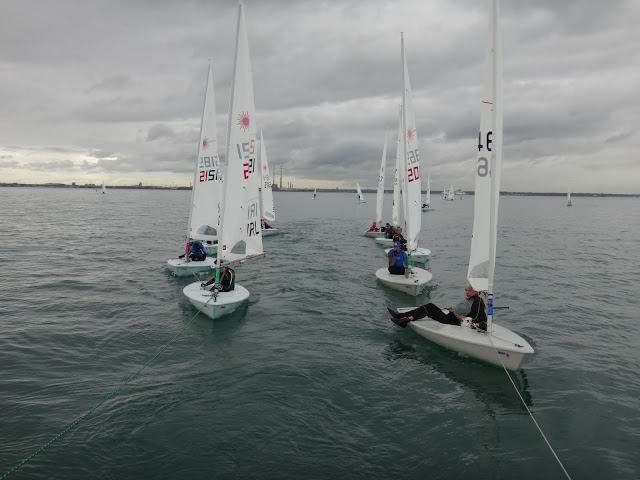 Day 1 of racing made the practice day look like the calm before the storm.  As we left the harbor on the finish line boat for the standard course, the wind kicked up and for a moment the wind indicator read 28, then settled into the low 20's as the sailors made their way to the course.  I saw several leave the harbor, sail a little distance toward the start line and then turn around and head back in.  Many on board were already wearing their heavy foul weather gear and there was talk about the upper limits that a Laser could sail and several on board believed that 25 in Ireland would be fairly difficult for a Laser to manage.

Meanwhile, Brett Beyer went by tuning with a couple of Aussies and all three seemed to be handling the conditions without issue.  As a few gusts came through, some of the Lasers began tipping, including Brett.  At that point, I began to worry about Doug.  But, after what appeared to be a brutal sail to the course start, the wind laid down a bit to a steady 15-20 and the races began.

Apprentice and Masters sailed together in the first start on the outer loop, followed by the Grand Masters sailing the inner loop and finally the Great Grand Masters following on the inner loop.  Just like on the practice day, the timing was such that they all finished about the same time with some of the faster boats in the later starts passing some of the slower boats in the earlier starts.  It was hard to see who was ahead in each fleet except for one.  The first boat around the course, came down the first run with a nice lead.  On the second downwind, he had stretched the lead even further and by the time he hit the bottom reach mark, he was picking up speed and increasing his lead even more as he headed toward the hook to the finish. It was quite impressive to watch. I had recently watched the true story of Secretariat and I swear I could hear the music playing at the end of this clip as this guy came flying toward us.

So who was the racehorse?  One guess ...

He makes it look effortless and he never quits hiking or accelerating until he crosses the line.  The one thing he consistently does is after the last race of the day, he goes right (around the committee boat) and avoids the racing area while virtually everyone else turns left and sails straight into the course of the finishing fleets.  I don't think it is intentional on the part of others, they are just exhausted and want to take the shortest route home to dry land and a hot shower.  However, I always get the feeling that Brett was just getting warmed up and ready to go round again.

As the bulk of the fleet was finishing the last race of the day, even though I could not see the wind indicator, the wind easily kicked up with gusts over 30.  There was flippage and tippage all over the place.  I thought I had my video going on my camera when the 30+ gust came through but it appears when I snapped a photo while recording, I actually turned off the recording.  Oh well ... I think I might get a second chance tomorrow or later this week.