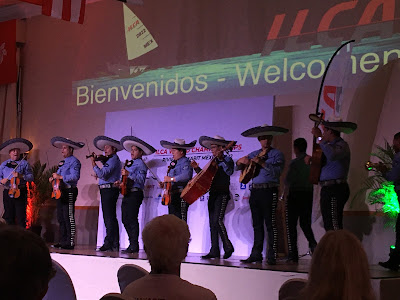 Practice Day and Opening Ceremony.  Doug's room is on the bottom floor and walking out his front door puts him about 6 feet from the boats.  The yacht club and launch ramp are just a few steps away.

They were under a postponement waiting for the breeze to come in. Doug decided to retreat to his room and take a nap and wait for the horn and the postponement flag going down. He thinks he is a light sleeper (he's not) and would hear the horn.

Needless to say, he woke up and realized it was kind of quiet, stepped outside and all the boats were gone. So, he rushed to launch and said there was a strong breeze and he actually tipped in the harbor trying to get out. Next, he encountered 4 to 5 foot waves, not rollers but full on waves. He said more than once he had the thought 'I shouldn't be out here.'  I'm a little worried for him.

I was talking with him as he headed out to the Opening Ceremony and he had to immediately double back and get his mask. He said it's really impressive, everyone is wearing a mask. When checking in and waiting in line, they actually have people going through and telling people to back up for social distancing. Quite a change from the United States, especially Texas. I'm thankful for it.

Really wish I was there. Here is a video of one of the tigers at the hotel carrying around its newly acquired purse. I guess someone got too close?