How the Laser Rigs Work (and and can be improved)

99% of new design is from top down. I’m big (95kgs) and when being asked to design for 45-60kgs your first reaction is to scale down.
But I am also lucky in that we tried to do that, with Takao Otani San (PSJ owner) for the 29er and we learned that it did not work. The 29er is not a scaled down 49er, rather it is its own unique design and that’s possibly why 29ers are so much faster than the 49er at the extreme.
To appreciate the design, here are some of the terms we use when designing a rig:
The Laser Rigs
So, when we started to get bogged down with the new C5 rig, Takao suggested that we forget about “Flame rigs” and go right back to first principals. We did an analysis on the Standard Laser Rig, the Radial Rig and the 4.7 Rig. We knew the 4.7 was great in a breeze which is why it has been so successful in , but it’s poor in light air and with that in mind, we looked at hundreds of photos of Laser rigs and also of people sailing them. We also had lots of data from Olympic Gold Medalist Tom Burton from a program called SailEQ which is an analytical program under development.
We used the Standard Rig as a base line, and we determined that a well-sailed Laser was sailed at 6° heel, mostly to keep the skipper’s butt out of the water. We also determined that the Lead was about 130mm. In a boat sailed flat, this would lead to lee-helm but because a Laser is sailed at 6° this results in the well known weather-helm.
What we found with the 4.7 Rig was this Lead was upwards of 300mm so in lower winds with the skipper sitting upright and the boat is less than 6° heel, and without mainsheet tension pulling the CoE aft, you do get lee-helm and that has always felt awkward.
Laser’s have Leads because when the boat is heeled at 6° it wants to round up. A 49er has Trail because it’s sailed flat there is no round up.
The Rudder and Centerboard
The centerboard is designed to resist sideways movement while the rudder is designed to steer the boat. These are very different functions, so it's not smart to load the rudder up completely, but you are dragging it through the water and less than 5% of the time its steering, so you may as well make it do something.
Therefore we load it about half of the side pressure that you would on the centerboard. In a perfect world, you set up the boat to carry about 23-24kgs on the centerboard and about 2.5kgs on the rudder. So a gust hits, it automatically wants to “feather” to head up without putting an excessive load on the rudder (too much steering is like throwing a bucket over the transom, hence a “bucket curve”).
In a breeze, the kids in are good, they strap their sails down to the deck pulling the CoE aft, and they sail often at heels far greater than 6° that reduces the weather helm.
The next thing we found when we actually measured the area, a 4.7 is not 4.7m² it’s actually a little under 5.1m². In fact, we found all 3 Laser rigs are understated. It all depends on how you measure the area, and to be honest the area is just a number, what’s important is that you use the same system across the whole design spectrum.
Lessons from Other Rigs
Next bit gets interesting because we already knew that if you reduced weight aloft, as in going to a mast like a carbon rig, you have to increase sail area or you will skew the rig to lighter weights. With the 49er we tacked on 170mm of mast height and about 1.5m² onto the total mainsail area of 19m². But with the 49er we also wanted to increase crew weight from fabout 148-152kgs to 165kgs and to date, that’s exactly what’s happened.
We also had the Flame rig data and to a lesser extent information from the 29erC rig. 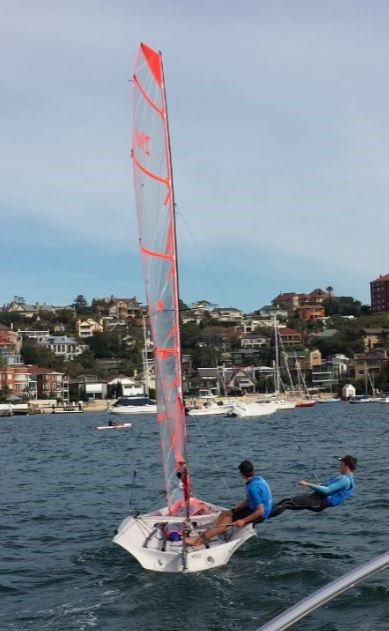 We knew we had to up the sail area, approx. 10%, so say 0.5m² was about the target, but we decided to hold that down to 0.4m² because the target market was smaller Asians and it also allowed us to reduce the mast height. So even though there was more area, the Arm (distance between CoE & CLR vertically) actually reduced.
To be honest, I don’t know where we ended up, because empirical testing always trumps theoretical but my guess is we are at 5.4 – 5.5m².
Fine Tuning
By this stage, we were committed to a square head at the top of the sail, but the big issue with a square head is how big should the length of the top batten be. If it’s too big/long then you have to use excessive downhaul tension to make it reactive. Too short, and it may as well be a pin-head rig and you lose all the advantages.
The big advantage of a square-head over a pin-head is the mast bend is only half! Long term, this leads to a near indefinite mast life. It also reduces problems with hoisting the main and having overly hooked leaches in light airs.
Ian MacDiarmid and I worked on this along with mast stiffness and position of the bend so that we could end up with reasonable downhaul tensions which allows us a wide range of crew weights and without excessive vang loads. We reduced foot lengths, but the big breakthrough was being able to “splice” (grind) the mast at deck level. This allowed us to drop the whole mast further aft, it allowed us to use a stiffer topmast, and it got the Lead down into the 120-130mm in all wind ranges. All this made the helm feel good.
Later, Takao made some unilateral decisions to reduce the “splice” to reduce the helm when sailed at 6° and Clive Watts (CST owner) was able to deliver us a “kinked” mast at deck level and that reduced weight and cost.
Late last year, Takao and I played with vang lengths which allows us control over lower mast camber. Sure, we threw away some booms that had become Swiss cheese and the lower mast of the now C8, it’s quite hard to believe it’s still standing but we had something really special.
In February, I happened to be in Longchi, China, working on the 29erC rigs and I watched two smallish Chinese girls struggling with a 4.7 rig. Everything Takao had talked about was there in front of my eyes. The precise Standard Laser Rig Lead is 136.83mm but would obviously be less than that with the main sheeted hard down. The precise 4.7 Rig Lead is 295.84, more than double. By splicing the mast and going to a square head, we got that back to about the same spot so the boat feels so much better.
We have the splice at 7.5° in this, we ended up less after Takao opted for less weather helm, we also ended up a bit bigger than this shows, with longer cord lengths. I need to re-do those measurements.