Thanks to a Chicago Mechanic


I got a really good deal with my Turkish Airlines ticket to Oman in part because it permitted up to 120 pounds of luggage at no cost. This is a sailor's dream come true, especially for the return trip in case there is wet clothing. And it was not until after I had booked the ticket that my friend, Laban, told me that it was a real shame that I would be connecting through Istanbul without seeing the city. I had a feeling that leaving Chicago late because of a mechanical problem would put my connecting flight to Muscat in jeopardy. So yes, I got to see that great city.

Most people would think that having to kill 22 hours with only carry-on items as a bummer, but I had the feeling that it would be an adventure. So here's what a Laser sailor's one-day can look like with the help of a young Turkish guide whose name I could not pronounce, but thankfully whose friends called Dolphin.

The first thing I decided was to travel by bus and tram rather than take cabs. Not many people spoke English, but everyone was really friendly. After checking out the layout of the Old City, my first stop was the Blue Mosque. It was huge and when I stopped to marvel at it, a voice beside me said, 'that's the Blue Mosque.' To my left was a 17-year old fellow on his way to prayers, and he offered to take me through it. Not knowing any of the customs, I accepted. Thus began an extraordinary 5-hour friendship where he would show me his city in return for me helping with his English. I guessed he thought that doing someone a favor was worth skipping prayers. 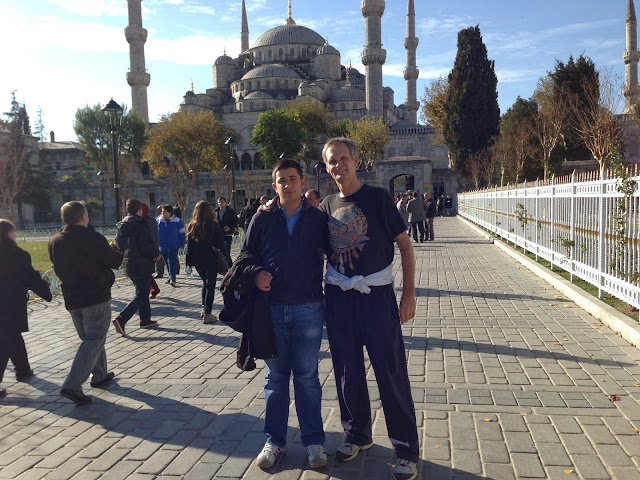 After the Blue Mosque, we circled behind it to see one of the smaller bazaars and then headed for something Laban said I would love - the nearby Hagia Sophia. It's a 1,500 year-old church that was later a mosque and is now a museum. But on the way we passed the Underground Cistern and Dolphin insisted that I check it out. It was an underground cave built in the 6th century, then forgotten for 900 years, and then discovered again in 1545. Walking through it was list like being in a James Bond movie, and holding up the Old City were row after row after row of columns ... very cool. 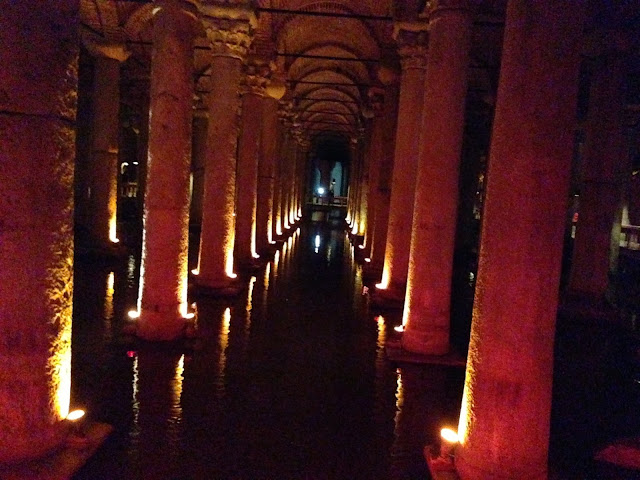 Dolphin's uncle owns several shops nearby so we had to drop in to say Hi. I'm not a coffee drinker but could not pass up a chance to have a Turkish coffee and talk religion, politics, and economics in the middle of hundreds of Turkish rugs. When I convinced him that I was not going to buy one, we moved to the jewelry store next door where it was harder saying no to a surprise gift for Pam (I tried that once in the Dominican Republic without success).

So when the uncle realized that I would not be buying anything, then he said, "Time is money" and led me to the door. Only then did I realized that Dolphin was nowhere to be seen. "He had to go," so off I went. And sure enough, he was waiting for me a block away.

We walked though the Hagia Sophia and I can sum it up with it's massive, it's beautiful, and well, it's massive. I was impressed that it's a museum and open to people of all faiths ... and not to be missed! 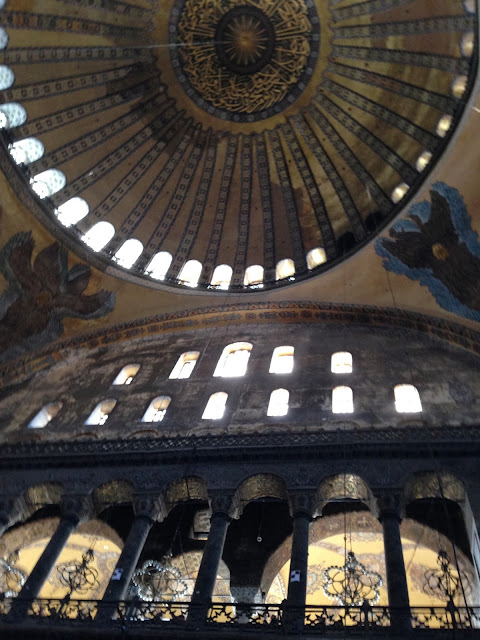 My friend Laban told me that one of the first things he would do was walk to the old harbor and have a freshly-caught fish sandwich. So that's Dolphin and I did. The meal for two including drinks was 15 lira, or about $8 US. 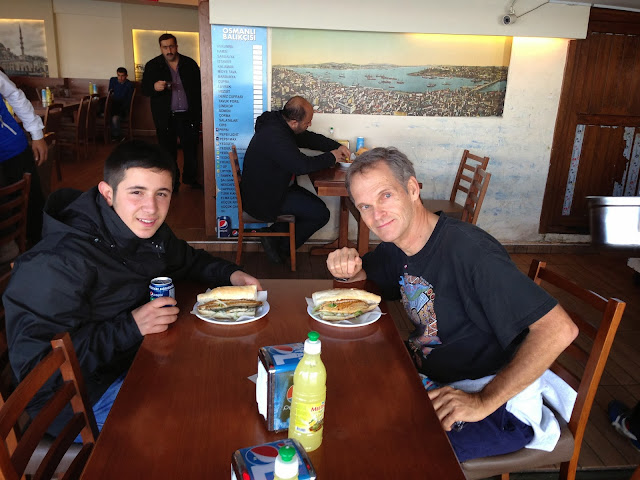 Right next door was the Spice Bazaar which felt it was out of the same James Bond movie. I kept telling myself, "got to get something for Pam and Laban," but what? At one shop a fellow gave Dolphin a big hug and invited us in. For the next half hour, we were treated to some of the most exotic treats and tea that I have ever tasted. Finding gifts wound no longer be a problem! 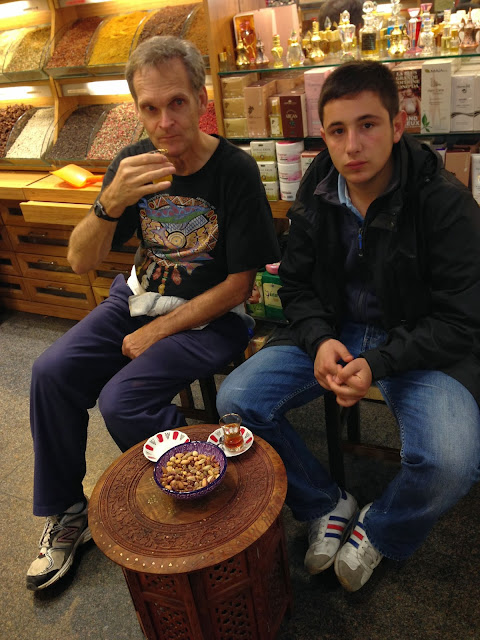 We had one more hour to kill and Dolphin told me that he liked to play  Backgammon, so we found a small outdoor cafe at the end of a tiny alley and we had more tea and played lots of games. Let's just say that I'll stick to competitive sailing! 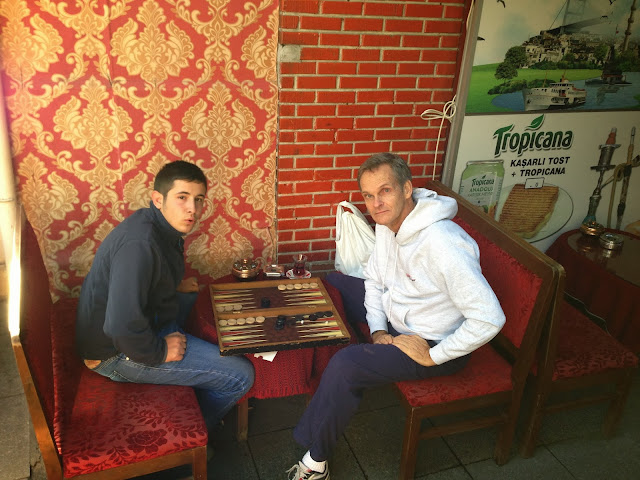 The hotel where I had checked my carry-on luggage was a 1km uphill walk and I knew that this was out of Dolphin's way, but he insisted on walking with me. When we got there I was half expecting the kind of handout request that you see in so many other cities, but Dolphin asked for my Facebook address, shook my hand, and thanked me for the English lesson. What an awesome young man!

My only regret was that the Grand Bazaar was closed on Sunday so we could not see it, and the only thing missing after a long day of walking around the Old City was a really friendly German fellow insisting on buying me a cold beer at the airport. Which of course is what happened. Thank you Chris!

And of course a special thanks to a mechanic in Chicago who could not quite get the problem on our plane fixed in time. So, now it's on to Oman.