Laser Trademarks Up for Grabs?

by Pam
I originally wrote this back in November but took it down the next day to wait for a more appropriate time.

As noted in my LaserPerformance United Unions post, Rastegar has quite the maze of confusingly incestuous entities.  It appears that he lost track and the result is that he may very well have lost some of the trademarks for LASER, SUNFISH, VANGUARD, ZUMA, RED DRAGON and NOMAD.

Quarter Moon Inc. d/b/a Vanguard Sailboats sold several trademarks to Karaya Holdings Limited, an Irish entity, which then transferred the trademarks to Karaya (Jersey) Limited, a Jersey Island entity.  Seems fairly straight forward except that some errors in the transfer to the Jersey entity makes it questionable that the last transfer is valid which leaves everything still in the name of the Irish entity which is now dissolved.  Whether or not the errors can be papered behind to salvage ownership of the marks may have to be determined by a court of law. 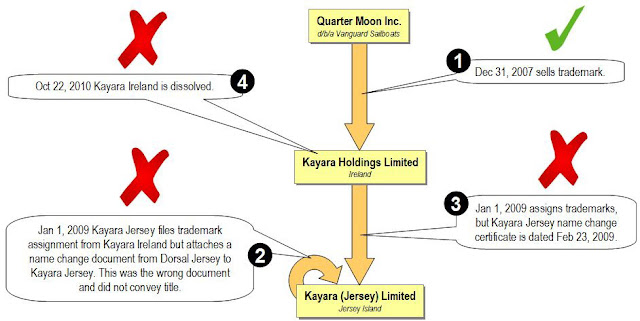 So then, being curious, I pulled the publicly available paperwork for Karaya Irish to see if I could determine if they properly conveyed the trademarks to Karaya Jersey which would mean an easy filing with the USPTO to correct things.  What I found was that the paperwork did indeed list the conveyance to Karaya Jersey but they listed the transfer as of January 1, 2009.  If you go back and look at the name change document they filed with the USPTO, you’ll see that the name change from Dorsal Irish to Karaya Irish didn’t happen until February 23, 2009.  Meaning, it could maybe be argued that the trademarks were conveyed to an entity that wasn’t yet legally in existence.

But then the icing on the cake is that the Karaya Irish entity, which, at present, may be the last entity to hold clear title to the trademarks, was dissolved on October 22, 2010.  That might be a problem.  Hard to paper behind something when the conveyance was hosed up and the entity that needs to correct it is dead.

Confused?  Easy to see how they lost track of which door the trademarks were hiding behind.  Doug drew the diagram above to make it simple.  It didn’t help matters that they had two Karaya entities and two Dorsal entities, a pair of each in each country, and in Jersey one became the other but in Ireland they remained separate and then 2 were dissolved, leaving only 1.  That’s just plain jacked up.

The LASER marks owned by Karaya that are possibly up for grabs are in the classes of goods that include sailboats and sails.  LP has another foreign entity, Velum Limited, that owns the LASER marks that secure the class of services that includes regattas.  And that registration is jacked up too.

Most people have heard about the critically received 8 year deal that LP secured with the US Inter-Collegiate Sailing Association to use LP manufactured boats exclusively for all national and semi-final college championships.  After securing such a deal, I predicted back in November that the ILCA would be influenced to go in the direction of following through with their fundamental rule change, which they did.  I mean from a business point of view, LP has the LASER trademarks and the 8 year exclusive deal with ICSA.  That seems like a fairly strong bargaining position.

Then I found this very interesting post about why trademark holdings companies are a bad idea.  Skip down to the section titled: Legal Pitfalls of Licensing through Trademark Holding Companies: