By Doug
Laser Cheat Sheet. Half way up the first beat of the Laser medal race I made the comment that this was the "key moment in the race." Pavlos Kontides (CYP) was not going to beat Tom Slingsby (AUS) by the required 7 places to win the gold medal, so it was just a race to see who would beat who in front of the large crowd. The boats were even with CYP in the controlling right position (because tacking would have given him the right of way). And then this happened. 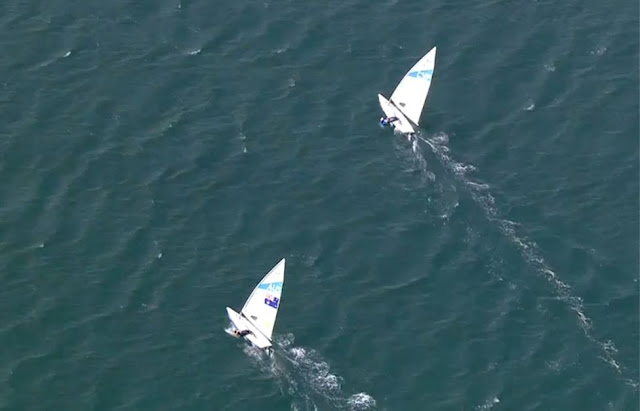 AUS got the dreaded (or wonderful) "inside lift" and the advantage immediately reversed so that when CYP tacked, AUS could cross and then tack on top of CYP. The race was over.

During the inside lift, AUS gained about one boat length on CYP every 5 seconds. No one has this speed advantage, not even Tom Slingsby, and is why I believe that sailing angles are more important than boat speed.

CYP did have a defense but did not use it - he could have immediately tacked and the inside lift advantage that AUS had would have been negated, plus CYP would have maintained his right-hand starboard tack control.

This happens time and time again with all sailors and was really obvious from the excellent aerial coverage at the Olympics. Here are some more examples from the women's match racing. 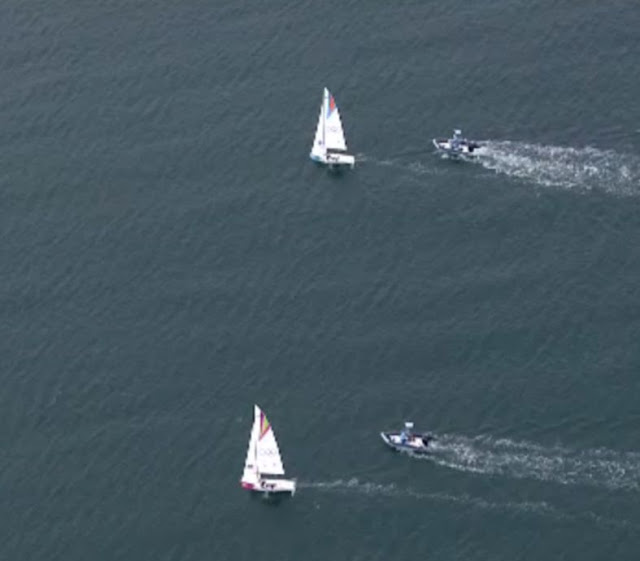 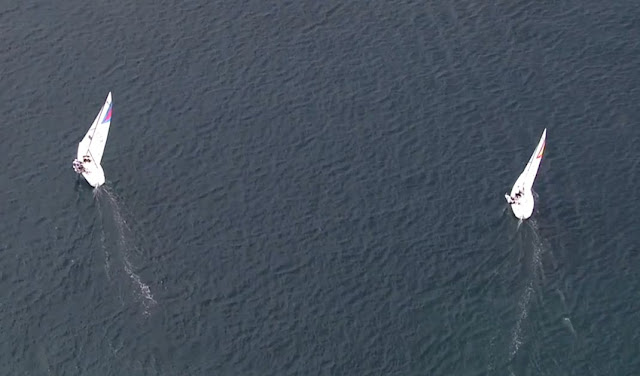 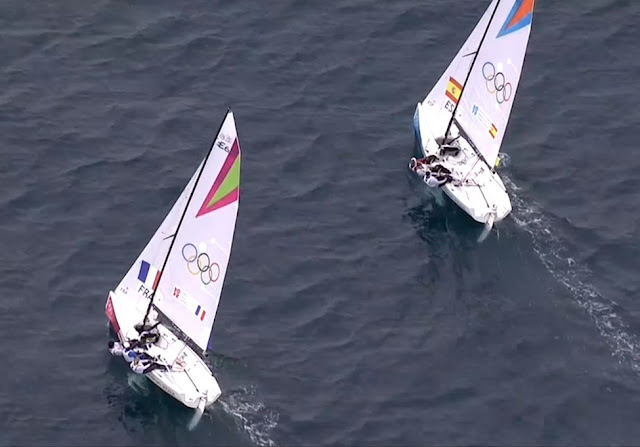 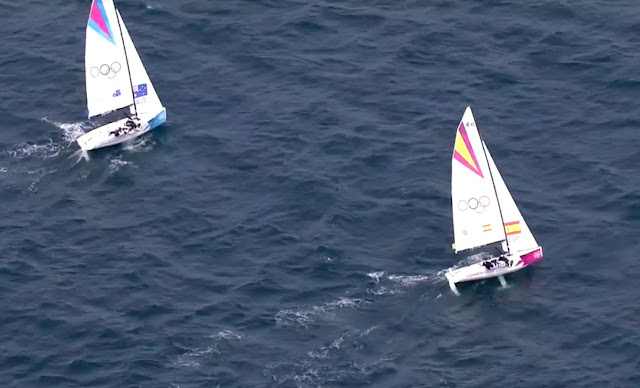 For me, the amazing thing about these photos is that no one on the outside boat is aware of what is going on. Absolutely amazing!

Now, I can understand how it's hard for a Laser sailor to keep looking around to spot this, but when there is a crew on board, then someone has to keep track of the other boat(s) to windward. Not doing so is a huge waste of boat speed, training, sponsorship, time away from family, and everything else that prepares Olympic athletes.

In each case, the outside boat must tack to negate this disadvantage, and if the inside boat also tacks, the inside advantage switches to the other boat for as long as this temporary breeze stays the same.

So, let's review: if someone told you how you could gain one boat length on your competition every five seconds, would you be interested? What could you possibly do to have such boat speed? The answer is never with boat speed – it’s just not possible in one-design classes. The answer is in something that few people understand – what I refer to as sailing angles.

Here, two boats are going to windward in a steady breeze. Neither has an advantage and either can go in any direction without gaining or losing.
The good news is that in these conditions boat speed is the best way to gain, so you can go out and buy a new sail and polish your blades. The bad news is that the wind is never like this on the race course. So, before you spend any more money, spend some time understanding how these angles change.

In a race, one of two things happens. If the wind is spreading out and the boats are on starboard, the one on the left gains as shown by the color of the lines. All other things being equal, the one on the right must tack immediately and the one on the left must hope that he or she does not. If right delays tacking for just 5 seconds, it will lose 1 boat length. If the boats are on port, the one on the right gains and the one on the left must tack.
The key to sailing angles is sailing with your head out of the boat – looking around to watch the angles of the boats around you because they constantly change. This is important in match racing, and also how you can pick a specific person who you want to beat, something that I wrote about here. The best of the best have amazing boat speed, and this is one of the few  ways to beat them if that's your game plan:
Two campers are walking through the forest when they suddenly encounter a grizzly bear. The bear rears up on his hind legs and lets out a terrifying roar. Both campers are frozen in their tracks.

The first camper whispers, "I'm sure glad I wore my running shoes today."

"It doesn't matter what kind of shoes you're wearing, you're not gonna outrun that bear," replies the second.

In sailing, I don’t have to hit every shift perfectly – if you're my target, I just have to beat you!
Sailing angles is how you can do this. If my game plan is beating a specific person, I’m much more interested in getting the angles right than where I am on the course or what my compass says. In fact, the very best sailors I get to compete against do not even own a compass. Sailing angles tell you what the wind is doing to your boat as well as everyone that you’re sailing with. No compass can do this.
Of course, the other thing that happens is the wind may be converging. For me, this does not make sense but it happens all the time and is what creates the inside lift. If the boats are on starboard, the one on the left loses as shown by the color of the lines. All other things being equal, the one on the left must tack. If the boats are on port, the one on the left gains and the one on the right must tack.
This is a scenario that is fairly common after rounding a leeward mark, where the inside boat gets the inside lift.
The lead boat has to keep looking over his or her shoulder and must tack if the inside boat is on a lift. In spite of this, very good sailors will focus on boat speed and not look around to see what’s really happening to their lead.
These diagrams show the boats side-by-side for illustration purposes, but sailing angles work for all boats at all times. In this next example, the boat in the lead on starboard should hope that the boat behind on the left does not tack. If it does, the lead boat should only cover with the understanding that it will lose until the angles improve.


One way for the lead boat to ensure this is less of a factor is to sail directly to windward of the boat that it is targeting to ensure they both get the same wind with the understanding that the angles may sometimes be different as the boats sail into wind shifts. This favors the boat that is behind because it can force the lead boat to sail into headers for a few seconds per shift. The way that the lead boat defends against this is to tack on the shifts and hope that the boat behind does the same. The way that the boat behind defends against this is to sail into the header and hope to get some separation and its own angles.

To benefit from these sailing angles, you have to learn to tack quickly and to sail with your head out of the boat. The best way to do this is by sailing at night to enhance your feeling of the boat. A good daytime drill is to watch something upwind and be able to tack several times without taking your eyes off this object.

For me, there are three ways to sail upwind: by the course, by the wind patterns that you have, and by the competition. Sailing angles is purely by the competition. During any windward leg, the importance of these three strategies changes and it all boils down to one thing - when to tack. What works for me will be in another post.