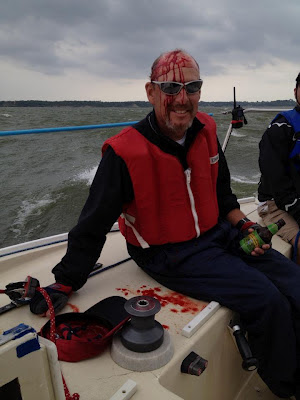 Fort Worth Boat Club is an awesome venue.  Great facilities, food, people, race committee, and racing.  Almost every time I sail keel boats in Fort Worth, it’s blowing … and I mean blowing stink.  Some circuit events seem to always be scheduled on a weekend that provides the highest degree of excitement and memories.  I still fondly remember the 2010 J/24 circuit stop.  And while, I wasn’t at the 2012 J/24 circuit stop, the picture on the left is worth a thousand words.  That’s my old skipper, Kelly Holmes, in the photo.  I can only imagine what happened.

So, at the Laser circuit stop this past weekend … well ... it wasn’t like that.  Not even a little bit.  Just a tiny hint of a whisper of wind and only 7 competitors.

At the skipper’s meeting, since day two promised even less wind, they asked the competitors if they wanted to make it a one day regatta.  One of the sailors from Doug’s favorite Dallas fleet said that if he was within striking distance of Doug at the end of Saturday that he wanted to sail on Sunday.  Doug responded that the guy was asking a rhetorical question.  It was a one day regatta.