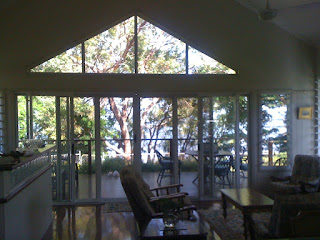 2-28 Arrived in Brisbane and was picked up at the airport by Peter, my long-time Aussie friend who I used to sail with in the 70's. The 16 hour Qantas flight from Dallas was uneventful and I felt no jetlag. Peter and Alison live on a peninsula overlooking the bay where we will be competing. It's a fabulous place that feels like a 5 star hotel. They have graciously insisted that I stay with them for the Worlds.

Peter recently bought a yellow Laser for $200. Actually, he got a second boat and a trailer thrown in for the $200. The Laser has not been sailed for at least a decade. The hull is heavy and the fiberglass has tiny holes, plus the blades are horrible - a slow boat for sure. And just what I need to really have to work hard to keep up with the others.

2-29 Put Old Yeller together at the club with the radial sail I traded a sail for at Fort Worth Boat Club. It has some yellow dog stains so it matches the hull. None of the controls worked well but I wanted to get on the water to play in the 12-15 sea breeze.

The racing area is in shallow water protected by islands, so there are no ocean swells. There can be a strong tide and this, with the sea breeze, results in 2-3 foot waves that are close together and hard to catch - more like lake sailing than open water sailing. Downwind speed will be the most important factor. I played with 3 other radials, feeling good upwind but my timing and boat handling in the waves downwind was not good.

At about the time I planned to come in Wolfgang Gerz GER had joined us and asked if he could go upwind with me. I thought, yeah, two time world champion in a new worlds full rig against me in a 25-year-old $200 radial. I agreed so he and I went on a long upwind together and then downwind back to the club. He insisted we do it a second time.

For reasons I cannot explain, I was faster than Wolfgang upwind - he was moving through the water better with a tight vang and foot (for the conditions) but I was out pointing him. Also, his body movement was back and forth in the traditional Laser-in-waves motion, while mine was more in and out focusing on pressure on the leach to power up over the waves.

On a run with a bigger sail he had a slight advantage catching the waves, and he was much faster on the reach back in. So, I still have a lot of work to do preparing for the Aussie Laser Masters on the 5th and then the Worlds start on the 11th. I'll be sailing Old Yeller in the Aussie Masters and then will have a new charter for the Worlds.

3-1 Went for a 2.5 hour sail in 12-18 and joined 6 other Lasers, all but one were Radials. Old Yeller was taking on water so I really had to work keeping up. Port tack upwind was good, starboard still needs work, and downwind is still a problem. The 90 degree turn carving demonstrated by Luke Lawrence was not working at all for me. Rather, the best people were sailing almost straight downwind with minor adjustments with the waves that are close together because it is so shallow. The Radials then went in.

So, I practiced with Wolfgang and he started jibing every 30 seconds and looked really good doing it. I decided to do the same. At the end of the run, I went up alone and did it again. The result was I felt much more in control with the waves, so that will be one of my main drills.

The weather pattern so far has been light in the morning and then building with the afternoon sea breeze. Click twice on Brisbane to get the marine forecast which has been accurate so far http://www.bom.gov.au/marine/wind.shtml 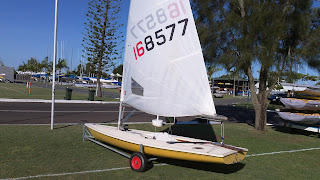 3-2 The breeze never really filled in so I did some work on Old Yeller, adding $100 in parts and increasing her value by 50%. In my 1-hour sail at the end of the day, the waves were lumpy for the 5-10 wind speed, making it difficult to focus on my favorite way of sailing to windward (heeling to windward to get more lift out of the centerboard). I've had this problem before sailing in larger areas where the waves develop their own pattern. Downwind there was not much to learn because there was no one else to play with.

The other boats are starting to arrive and 150 have been registered for the Aussie Nationals that start on Monday. So far, my boat is the only one that is not white. Got to watch out for the OCS's.

On Saturday there is the usual club races with 15-20 forecast. Old Yeller can hardly wait.

3-3 About 10 full rigs and 25 radials showed up for the regular Saturday club race in spite of the rain. The rain stopped and the wind picked up to 15-25 as forecast. It was pin-favored and I started near there in a sea of white boats. Good upwind speed in spite of having no bailer and water in the cockpit most of the time. Rounded second behind radial former world champion Greg Adams (AUS). Spent most of the run trying to clear the cockpit of water instead of catching waves, and felt slow for the rest of the race finishing 4th after Greg dropped out with a bent mast.

In the second start I hovered near the boat waiting for everyone to drift out of the way, but they did not and held their position well. So, had a second row start and could not hold my lane and had to tack away. The rest of the race was all about water management both inside the hull and in the cockpit. Also, the rivets of the top section broke and it started to collapse into the bottom section, resulting in a big crease in the sail. The fleet passed me and I finished second to last.

Old Yeller has taught me the importance of sailing both upwind and downwind doing everything to keep the cockpit clear of water. That will be her last lesson to me because she is being retired from service and I'll have a new charter for the Aussie Nationals that start on Monday. To keep things interesting, I'll still use my old sail.