Sailing in the Middle of the Fleet - When is Someone Behind or Ahead?

By Doug
A good question from Tillerman: My problem is that I never know whether a boat in a position like that on the same tack would be behind or ahead of me (unless it's very extreme like I can see him through my window.) What's the trick to judging that?

A Laser/Torch tacks through 90 degrees in almost all conditions. So, put some tape along the deck that's at a 45 degree angle to the center of the boat. Start near the CB and have the tape go up to the gunnel beside the mast. 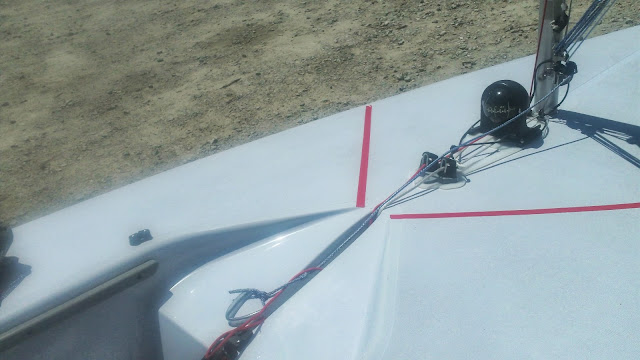 In this example, the boat end of the line is favored. If I was racing and a boat was where the pin is, that boat would be behind me. If it's on the line then we're equal.  If it's ahead, then it's ahead - how much ahead will help you prepare for a port-starboard possibility. These angles will change when you get lifted and knocked. For many people, this is much easier to understand than a compass.

After a while, remove all but the last 3" of tape at the gunnel for a quick reference. Pretty soon, you'll have a good feeling from the angles alone and won't need the tape.

Pam: When Doug recently told me about the tape thing, I wasn't sure it was right so I told him to take a picture and show me.  When he put up this post, I didn't know he'd done it and thought the middle of the fleet title wasn't appropriate because probably lots of middle of the fleet people can tell if they're ahead or behind.  When I saw the picture I thought that pin was favored and Doug said the boat was favored by about 4 boat lengths.  Then he blew up the picture to full screen and covered the red line portion and asked me if it was easy to tell if the pin was favored ... then I realized he was right ... again.