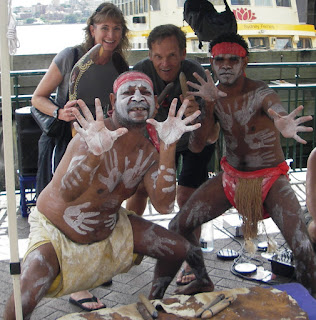 This was my first Worlds to attend with Doug. Where do I begin? In a word, WOW! I knew the Worlds was the highlight of Doug’s year but didn’t really understand. I also knew that he spent 8 years living in Australia and was sort of considered an honorary Aussie but again, I didn’t really understand. Watching Doug at the Worlds and later in Sydney was like watching an animal being returned to his natural habitat. I’ve never seen Doug more at ease with himself and the people around him. I also noted that he was far too comfortable driving on the wrong side of the road and navigating the very narrow and not well marked roads. I’m a little worried now that we’re back in the US.

I’m told this event was different than most previous Worlds. Spectator and photographer boats were virtually nonexistent. There were 233 competitors on two separate courses with four fleets sailing on each course. There were some hiccups with the scoring that were attributed to rumors that Jeff Martin was made redundant and not involved but we later heard that he had survived. Not sure what that was all about.

I ended up playing multiple roles at this regatta. Spectator, volunteer, Texan, North American, damn American, trolly girl, spouse, sister, tourist, and a fly on the wall. It was an absolutely fascinating experience.

The first order of business for me was securing a ride. One day I was on Doug’s friend’s catamaran and one day I was on a motor boat with a former commodore. Then I landed a volunteer position on the finish line boat. I was affectionately referred to as a damn American. Somehow with an Aussie accent it sounded like a compliment. They were a great group of people and I couldn’t have been treated better and it provided me with a great vantage point. Although quite busy writing down scores, I managed to write with my left hand and film and take pictures with my right hand. Not the best shots but the videos adequately captured a lot of the action and I got to see Doug’s spectacular first place finish where he was a minute ahead of the fleet. I was sooo proud. Video 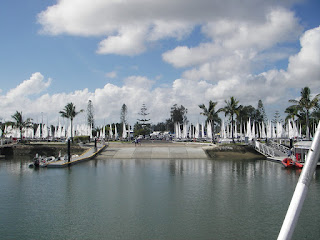 On the day that all races were abandoned, we had 233 sailors heading for one ramp all at the same time. We were instructed to pull up anchor and speed to the docks and man the ramp. It was utter chaos in a very organized sort of way. Dozens of volunteers running up and down the ramp grabbing trollies (similar to a dolly) and taking them to the competitors. If ever there was a quick way to ingratiate yourself to a sailor it’s to greet him at the bottom of the ramp with a trolly. The first handful, I actually helped push up the ramp but after that there was no time. By the next day, I was stiff and sore and felt like I’d been racing. But it felt great to be able to help.

On the lay day we hung out with Lyndall Patterson and Bruce Martinson. It was on this day that Lyndall said ‘it isn’t about the people you beat, but the people you meet.’ I heard stories that made me realize these international sailors have had some truly amazing experiences together. The racing is a significant part of it but it’s also just a small part of the entire Worlds experience. I’ve heard Doug’s stories about his sightseeing and interaction with other sailors and realize now that he needs to go back and add a sightseeing and observations section to his journals and post his pictures. 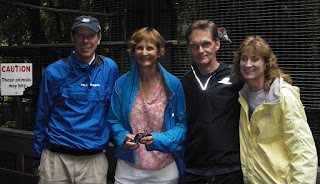 Listening to Lyndall and Doug talk about the Ireland Worlds where the lake sailors were struggling to get out of the harbor was entertaining. They laughed at how the breakers would take you straight up like an elevator to about 15 feet and then drop you straight off the wave. The lake sailors didn’t know not to ride it to the top and tumble down the wave. They provided a lot of entertainment for the open water sailors.

Lyndall, Doug and Bruce were comparing notes about the racing so far. Bruce had been told by someone that there wasn’t tide so he was unaware that there was. Doug had looked at the tide table but had everything backward and going the wrong way. Lyndall, the very accomplished female Aussie who often beats most of the male competitors, had to set the poor wayward men straight. The next couple of days, Doug and Bruce had three bullets between them. Thanks to a woman! And she did say, what I’ve long suspected, which is that when a guy looks up and sees a red triangle (female sailor) on the sail, they work twice as hard.

As I met sailors that Doug has known for 20, 30 and 40 years as well as friends and family in the area, I was welcomed with open arms. Now here’s the weird thing. Doug not only lived in Australia but he also married an Aussie and after 30+ years of marriage, she had never supported his sailing or attended a Worlds event. We stayed with her sister for a couple of days after the sailing and I was welcomed as a new member of the family. It didn’t feel like I was spouse number two … it was like spouse number one, in her own country, never existed. Very odd. 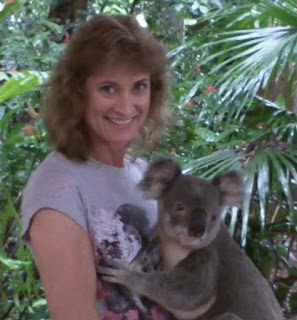 Doug was so excited to show me Australia. It was whirlwind touring. I got to hold a koala bear, feed kangaroos, see the Syndey Harbor bridge, the Opera House, Manly Beach, Bondi Beach and meet several Bethwaites and various friends that Doug has known most of his life. It was absolutely spectacular.

For me, the highlight of the racing was watching the great grand masters (65+). Many of the sailors were in their 70s and the winner, an Aussie, was 72. He was impressive to watch and just the nicest guy. Very inspiring.

The highlight of my touring was meeting Julian, Mark and Frank Bethwaite. Doug has such respect and admiration for them all. Frank is now 92 and sharp as a tack and I now see why Doug speaks so highly of him.

I’ve often thought that sailing keeps you young and after meeting all these sailors in Doug’s life, I'm more convinced than ever that sailing will forever be a part of our lives and this is the first of many Worlds to come.

Oh, by the way, I’ve never had this happen in my life, but since getting together with Doug, twice now while he was away at the Worlds, my house was broken into while I was still in town. Next Worlds, whoever you are, come on over, I’ll have a surprise waiting for you.