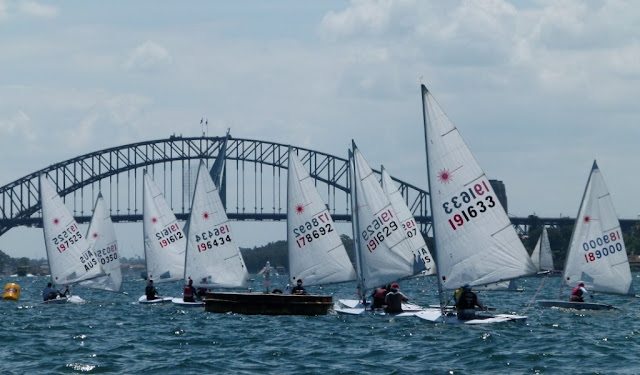 For years Doug and I have been without a sailing club to call home so we have just called ourselves NOMADS (NO More Annual Dues Sailors). It's been rather perfect. But that all changed this week. Doug woke up on Wednesday to find that his usual honorary Aussie status has been upgraded to be an honorary member of Double Bay Sailing Club on Sydney Harbor in Australia. Doug felt so honored because it is his favorite place in the world to sail and Aussies tend to be his most challenging and rewarding competition.

The DBSC weekly newsletter is always quite a fun read with all the nicknames for everyone and a wicked sense of humor. Dear Leader and the Black Pope were both at the recent Laser Master Worlds in Mexico and were a heck of a lot of fun to be around. I believe the Black Pope dubbed Doug the "White Arrow" after watching a video of Doug winning just ahead of Dear Leader in Mexico. Perhaps that will be his DBSC nickname?

Loved reading about DBSC's limited space solution. Active racing sailors have priority on space. Not active ... move. I can't count the number of times Doug has commented on nonactive sailors turning sailing clubs into an expensive storage facility and killing the local fleets by not having space available for active racing sailors.

Yep, it's a perfect match ... except for that commute to the club ... a minor detail.