Getting a top five result is hard, but winning it is much harder. At the recent Riviera Nayarit Master Worlds, Gavin finished 1st, and a lot of people commented on how much he had improved.

My experience was similar - 5th at the Wakayama Master Worlds, 5th at the Capetown Master Worlds, and then 1st at the Algarrobo Master Worlds. I shared how I did it but feel it may be even harder now to win. Gavin has kindly shared his thoughts about how he won his first worlds.

By Gavin Dagley
Wow. It still hasn't really sunk in yet. I actually got there - a Masters World Championship. Suffice to say I am pretty pleased.


This is my third trip to Masters Worlds and each regatta has been quite unique. At Hyeres, France, for my first Worlds I arrived knowing almost no-one - not even most of my Australian team mates. I was relatively new to the class and 500-odd Laser sailors all together can be a little intimidating. I think the thing that has meant the most to me is how quickly the friendships grow. The sailors are such a warm bunch that you can't help but be pulled in.

Doug and Pam introduced themselves on the second day when we were all trying to work out our places from the first day. (The scorers had been overwhelmed by the numbers and when anyone got missed at the finish they were simply scored DNF - and Doug had been one of those unfortunates.)

I also met David Rosenthal that day (AUS) who simply introduced himself and offered me an Australian team shirt. We ended up neighbours in the (very cramped) boat park. Tim Law (GBR) and I seemed to be in close company for most of the regatta, and it seems that that close rivalry has persisted into each of the subsequent regattas - we always finish within a very few places of each other, and there was only a single point between us in Kingston, Canada last year. That is the best part of the regattas - the annual catch-up.

Despite the friendly spirit of the regattas, the racing is not soft. It can have a distinctly determined edge to it. I realised after Hyeres, which is about 18 months ago, that I would need to do a lot of work if I wanted to ever have a chance at winning this event. It wasn't that my speed was so bad, but that any little mistake, or any speed weak-point, will be found out. Since my first worlds I have tried to put in a lot of effort into improving those weak spots.

I try to sail three or four times a week most of the time, and do fitness, flexibility and strength work most days in some form or other. I sail out of Port Melbourne in Australia and, though the Club has a number of very talented Laser sailors who will come out to train at times, most of my training time is alone. (Although there was one very notable training session last year: dawn on a weekday morning - 7am, 4 degrees C [about 40F], frost on the ground, with 20 knots of wind chill - and there are five Lasers training together off Port Melbourne.) Quality hours in the boat seem to really count for a lot - and I'm afraid that is neither new nor welcome news.

I have also found it is very easy for me just to go through the motions in training - get down to the boat a little late, do a few laps and a few tacks and think I have trained well. Because I do so much of my training alone, I think one of the keys for me is to be quite analytical and disciplined in my approach. I try to stay focused on the areas I most need to improve (this last year has been about building hiking strength and downwind speed) and set up some specific tasks for each session, as well as always including some handling and starting practice.

I also spend time after each session very deliberately trying figure out what I have learned – just trying to understand what is going on or how I might be able to do something better or fix an issue. As a result I have a number of exercise books full of notes, and I think that processing has really helped. I am always surprised at what subtle new learnings are lurking out there.

I think the biggest challenge for me has been downwind – particularly running in small to moderate waves. The techniques that make a Laser fast in those conditions seem like they are a “black art.” Coming into this regatta my mindset has always been trying not to lose too much on each run (rather than looking to gain places) – because the boats behind seemed consistently able to roll up to and over me. It also seems like it is a very tricky art to explain to someone who doesn’t get it yet. I don’t think I have yet come across any explanation that has really worked for me in a complete sense.

Having said that, I felt fast in this regatta, and was able to pull places back downwind. I suspect the difference might have been in lots of hours practicing the up-turn and the down-turn. I’m not quite sure. My logbooks are full of writing where I am trying to make sense of downwind technique and I am still trying to get my head around it. I suspect there is no short answer, but I just hope the new speed lasts.

I ended up using a Mark II sail for the regatta and fielded a few questions about what I thought of it. The short answer is that I prefer it, because it responds in a more familiar way to me than the Mark I, but I cannot honestly detect any consistent or significant difference in performance. Cristian Herman (CHI, 2nd GM) and Brett Beyer (AUS, who won the Masters for what seemed like the 100th time) seem quite able to make the Mark I devastatingly fast. The differences between the sailors seem to account for so much more than any differences between the sails.

The thing that I have found with the Mark II is that the settings are a bit more fiddly and precise. As a result, I use marks on the outhaul, cunningham and vang to keep track of the fast settings. (The best place for the outhaul and cunningham marks is on the ropes in between the blocks at the base of the mast and the cleats – the ropes don’t need to move nearly as much as for the Mark I sail, and using these marks it is much easier to get really accurate settings.) My set-up principles are:
In flatter water (compared to choppy conditions) I go a little easier on the cunningham, about the same on the vang, and a little flatter in the foot.

I also believe that the sail needs a good amount of breaking in time - two or three times more than the 60mins of full-cunningham upwind sailing that the Mark I seems to need. I used a brand new (Hyde) sail for the regatta. I had done a couple of hours of sailing with it in 15 knots or so of breeze before the regatta, but felt quite slow in practice and during the practice race. The sail did not feel right – as if it was not properly broken in. So after the practice race, in the building sea breeze, I stayed on the water for another couple of hours just giving the sail a bit of a smashing, and it felt better after that. (I have used the Pryde version of the sail in our Australian Nationals and it is also really nice.)


So, what now? I hope to be in Split, Croatia for the next worlds. We'll see. It certainly promises to be another ripper of a regatta - they always are.

More pictures by Pam on the finish line. Keep in mind that this is the end of the race and everyone is exhausted! 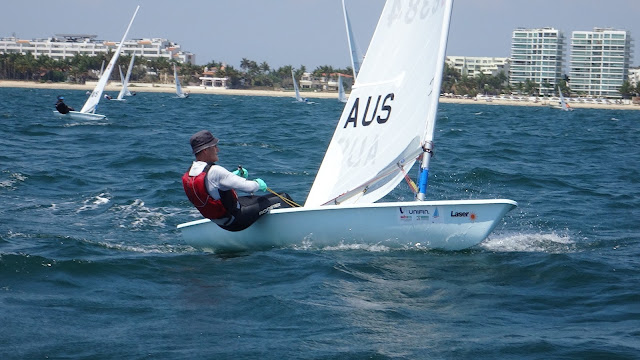 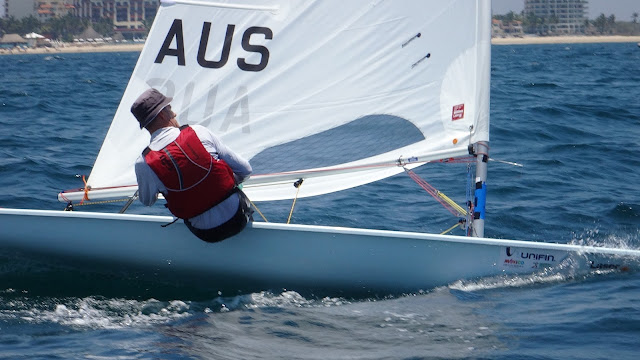 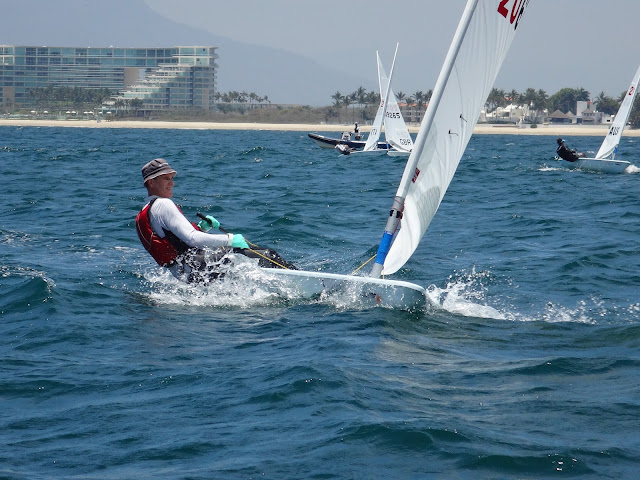 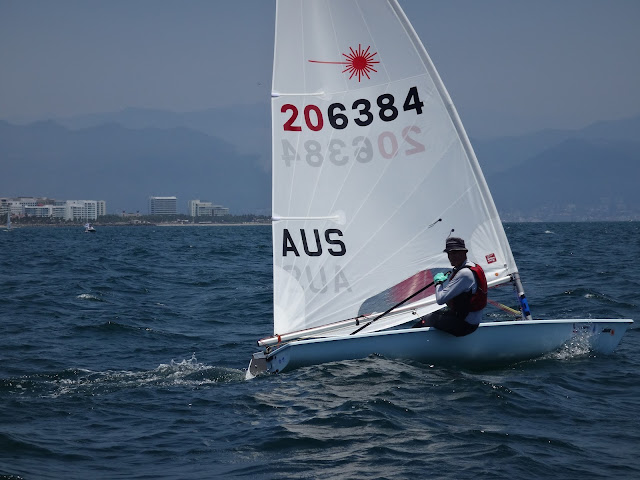 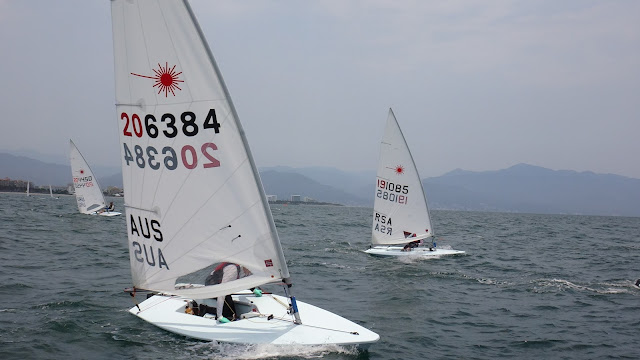 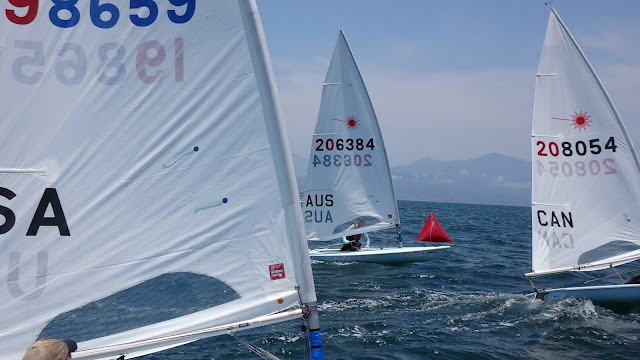 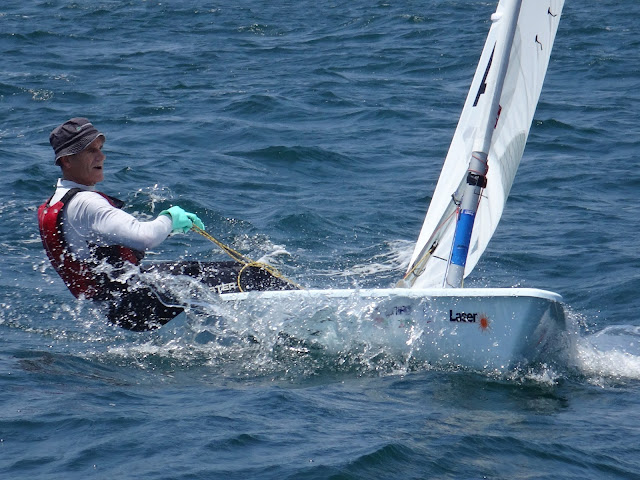 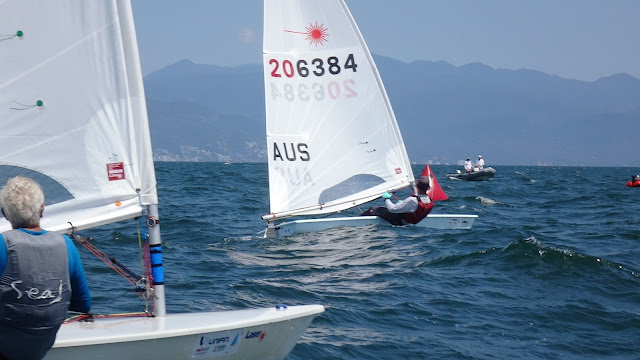