Dear, dear, lovable, wonderous, full of surprises, Peter Stephinson. You know, the foiling Laser guy a/k/a the Australian GGM Laser National Champion a/k/a the guy who fell out of his boat and finished a race at the Kingston Laser Master Worlds while simultaneously driving and hanging onto the stern.

Well, Peter decided he would race in both the Radial and Standard fleets this year at the Laser Master Worlds in Mexico. But, things didn't go as planned. He finished the practice race and ... well, that was the end of his World's competition.

So here's what happened ... and by the way, Peter is very much alive, having died for a few minutes but the Powers That Be sent him back. Having been born again on Mexican soil, he is now considered a Mexican citizen and says he'll be applying for his Mexican passport soon.

We talked with Peter, I mean Pedro, today who was still feeling a bit weak but he wanted everyone to know he was okay and, more importantly, he wants to share what happened. He's an inventor, researcher and explorer at heart and he learned a lesson he wants everyone to know about.

First of all, he didn't have a history of heart problems but a brother and some good mates who had heart problems motivated him to see a heart specialist for a full workup and he was pronounced healthy. He's fit and if you've ever been around Peter, he's always cracking jokes and laughing and has the best attitude and just goes with the flow. Not a candidate for a heart attack ... and yet.

Practice race for the Radial Masters in Mexico and he finished the race and had a dull ache in the center of his chest, said it felt like his chest had been bruised. He wasn't pleased with his performance in the race and decided he'd better get in some more practice so he headed back upwind by himself. His plan was to just go to the top mark and then reach back to the club at a better angle. By the time he got to the top mark, the wind had picked up to 20+ knots but the pain was gone. He headed back to the club and lined up in the queue for take out but had started to feel badly again and knew something was wrong. He decided to relax and stay calm and wait patiently.

A female sailor in front of him noticed he didn't look too hot and offered to let him go ahead of her. Being the gentleman that he is, he insisted she go first. The sailor asked multiple times but he kept insisting on waiting his turn. Finally, he got his boat on the trolly and he simply couldn't get it out of the water and told the young fellow helping at the ramp that he was going to have to pull his trolly all the way up to the boat yard, where he had a prime position right next to the club. When they reached his destination, he was feeling fairly weak and just laid down on the ground. One of the American gals close to him jokingly called out "sailor down" which got the attention of Andy, the local organizer. Bless his heart, Andy took the comment seriously. Peter inquired about an ambulance but it was out on a call so he told Peter they would have to walk a couple of blocks to the emergency clinic. They got about 100 yards and Peter could go no further. Andy got a taxi and Peter jumped in, still in his wet sailing gear except for his life jacket and off they went.

At the clinic, they got his shirt off and got all the wires hooked up on him and then they started tugging at his boots and getting his hiking pants off. As the pants came off, remember they have a bit of compression to them, Peter told the doctor he was feeling tingling in his hands. The doctor told him he wasn't surprised since he was currently having a heart attack. And Peter lost consciousness and remembers nothing more. He flat lined and was dead for three and a half minutes. They had to use the paddles on him a couple of times but they got him back, he had surgery to put in a stent and was put on a ventilator and into a medically induced coma for 24 hours.  Pedro woke up in the hospital, no clothes, no wallet, no iPhone or access to his contacts.

Pedro most certainly would not be here today if not for Andy and being in the emergency clinic the moment he had his heart attack. In hindsight, and this is what he wants everyone to know, he calculated that he had about an hour and a half warning before having a heart attack. The dull pain in the center of his chest was the early warning sign. Something he shouldn’t have ignored. Instead of going upwind by himself in an increasing breeze, he should have called for immediate assistance and gotten to a hospital straight away. The hiking pants, he theorizes, provided compression which gave him a little extra time to get to help because the moment they came off, things went south immediately.

Pedro was in good spirits when we talked this evening and his family is with him. Well actually, they were at the mid-week festivities at the club and his fantastic travel insurance is void if he leaves the hospital for the night so he called us instead. Once he gets clearance to travel, although he would like to stay for a while in Mexico and enjoy his new home country, he was overruled and will be skipping this Worlds and heading back to Australia ... most definitely a winner!


Update: Robert Scheidt with Pedro just before heading back home to Sydney. 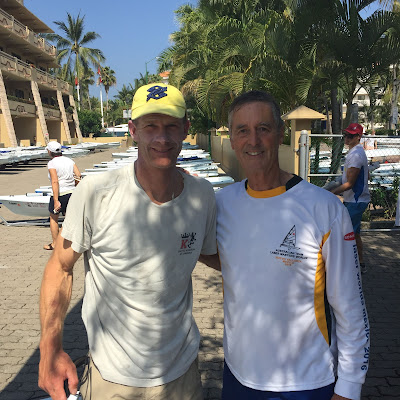