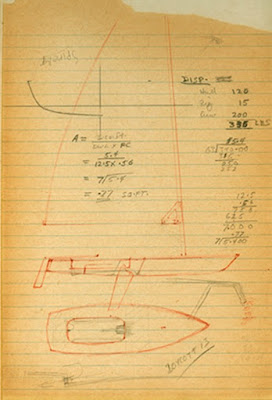 Only a genius could take this Bruce Kirby sketch and turn it into a worldwide phenomenon. Ian Bruce was that person, and within three years his company Performance Sailcraft was making Lasers in eight countries.

As luck would have it, I learned to sail in Montreal and was briefly a member at Point Claire Yacht Club, home of the Laser. But I left for Sydney in 1971, just before Lasers were introduced. It did not take long for them reach the Aussie shores and dominate both in numbers and talent.

Sydney Harbor was full of Lasers and the Manly hydrofoil ferry had to weave through a fleet. It was quite a sight to have a hydrofoil come straight at you before turning away!

Many years later I moved back to Montreal and remember Ian showing up for a local regatta with Laser number 100,000. We all just shook our heads in amazement.

The way that Ian designed the Laser and its manufacturing process was pure genius. The two-piece mast made it easy to store and transport. The loose-foot and mast sleeve were also new. And at a time when boats were still made of wood, it was the first time I saw a fiberglass deck and hull glued to make a finished boat. And it was Ian who insisted that the Laser be held to a strict one-design so that is was the best sailor who would win.