When to Slow Down

By Doug
We had a local Laser event last weekend and something interesting happened in one of the races. I was on a run chasing a really fast, talented 17-year old sailor who was just in front. Each time I tried to go left he defended by going further. With the rest of the fleet catching us, I decided to go to his right and we pulled even. Then, about 20 boat lengths from the mark, I slowly pulled in my main sheet to slow down.

The plan was to have him edge ahead and then dig in quickly five boat lengths from the mark, get inside, and get buoy room. But the plan did not work because he saw me pulling my main sheet and said "that's something I've never seen before" and pulled in his main sheet to also slow down.

Hence, this blog post. With all of the emphasis in our sport with going faster, why would anyone want to actually slow down?

The idea was first described to me in 1971 by Frank Bethwaite who was a big fan of Manfred Curry. Frank thought that Manfred's work was the biggest contribution to sailing in the previous 50 years - something that can be said about Frank's work today. One of Manfred's few inventions that did not catch on was actually a brake for slowing down: 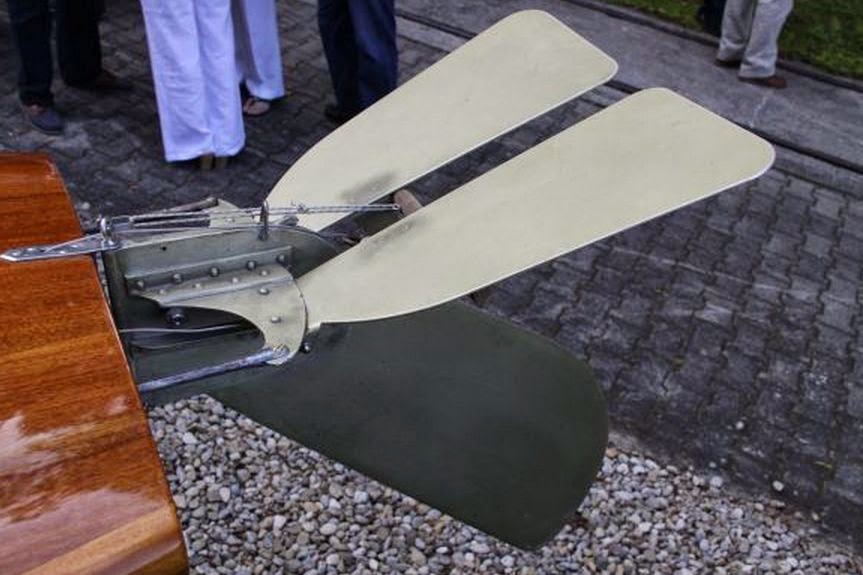 Not very subtle, but there are definitely times you want to slow down. In fact, in the last race I made a bonehead mistake that was very costly.

I'm one point behind this 17-year old who is leading the event, and I'm leading the race at the first weather mark. It's tight and there are two boats on my hip:

Sure enough, we're headed and I cannot make the mark. So, what do I do? I jibe around, get enough speed to tack inside the next boat on the layline, fouled him, and then had to do my circles. Pretty stupid, but I was still ahead of the quick teenager. But in doing my circles, I tipped, had trouble getting up again, and found myself in last place.

What should I have done?

I should have slowed and stopped by pushing out my boom. After the two passed, I could have put in two quick tacks and rounded in third place. But to do this, I had to realize earlier that making the mark was a low percentage move. Sailing more conservatively is much better than hoping that things would somehow work out. I got greedy, which rarely works with mark roundings, and it cost me the event.

Here's another example. Green and red are even and red looks like it can get inside green at the mark. If red is skilled and it's windy, it's almost impossible for green to defend against this: 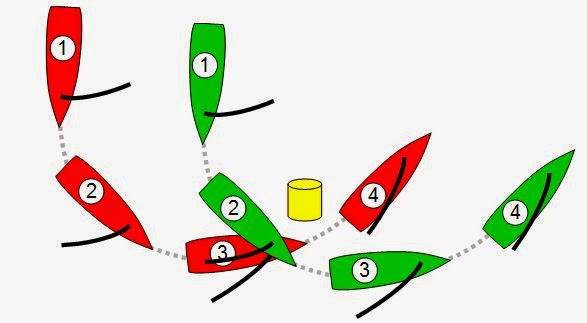 Unless green slows down so that red does not have the chance to get inside: 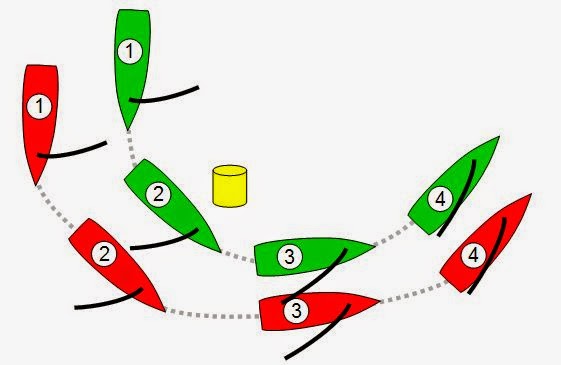 Green cannot do this within three boat lengths because it has to make a seaworthy rounding. But anticipating red's move further away gives green a safe rounding, and then the option of tacking if it wants or just continuing to cover red.

Slowing down is counterintuitive and definitely works  when you need it. In the first and third above examples, it works best when you disguise what you're doing - something that Manfred Curry clearly did not do!