by Doug
My first Radial event was the 1992 NA's which was held at a local club. I finished 2nd behind former World Champion Peter Katcha, but there was very little wind and I did not learn much. Besides that one event, I sailed full-rigs exclusively from 1976 to 2012.

Living on lakes and sailing at night, I developed a good feel for light to medium winds. At the 1993 open Midwinters, there were 180 boats and I finished 5th at the age of 42 which was encouraging. And at the open 120 boat CORK Regatta later that year I was told by another competitor that I had "the fastest straight line boatspeed" in medium winds. So medium conditions in a full-rig was definitely my comfort zone, and I continued to focus on this.

So, why change to a Radial for the 2012 Master Worlds in Brisbane? 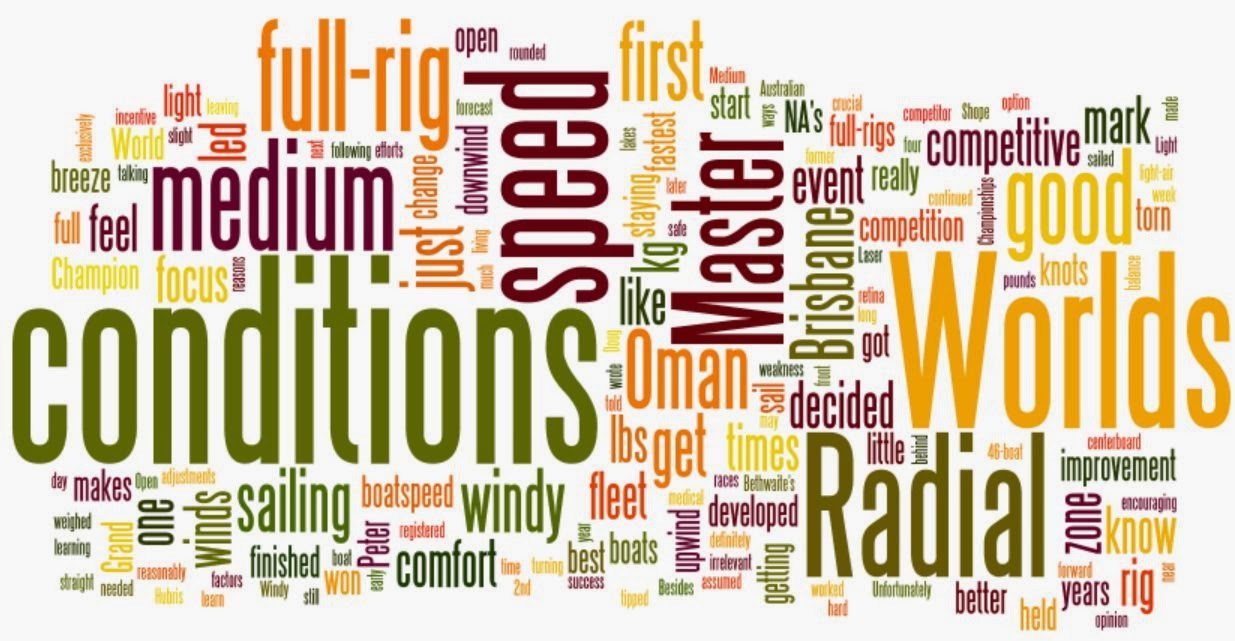 There were four reasons:
Before the Brisbane Master Worlds, the 2012 Open NA's were in Houston and I wanted the competition. With only 16 boats registered in the full-rigs, I decided to sail in the 46-boat Radial fleet. It had rock stars like World Champion Erika Reineke. My upwind speed in a breeze was getting better and I led at the first mark 3 times.

The 2012 Master Australian Championships was held just before the Master Worlds. The middle day had winds gusting over 25 knots and I led at the first mark in all three races. At the following Brisbane Worlds, I rounded first 4 times and second 3 times. So, speed in a breeze was getting good.

Now, I know that downwind speed is also important, but being at or near the front at the first mark is, in my opinion, crucial to success in a good fleet. And living in Dallas with no competition makes it really hard to develop good downwind speed (which is why I arrive early at Worlds to get used to the wave conditions).

The forecast for Oman was medium conditions, and Pam kept suggesting that I switch to a full rig. But there were two health issues that tipped the balance for me: a torn rotator cuff and a torn retina just before leaving for Oman - I just did not feel safe sailing a full rig if it got really windy.

So, here's how I approached the Oman Master Worlds:
As it turned out (ignoring the medical factors), I made one huge mistake. As I wrote in this blog, I do not know of any single person who is the fastest in all conditions, so it's best to perfect your own conditions and then be reasonably competitive in the others. For Oman, I assumed that my medium speed was good and my weakness would be windy conditions.

Unfortunately, my good medium conditions speed in a full-rig did not translate into speed in a Radial. And those were the only conditions that we got in Oman.

None of the full-rig techniques that I'd developed over the years worked in the Radial, and my upwind speed was very average. Things that power a full-rig feel empty in a Radial, and ways to get more lift out of the centerboard just do not work. We're talking very fine adjustments for very slight changes, but that's what is needed in a Worlds fleet. A lack of boatspeed at a Worlds event makes for a very long week.

So, what's next? Thanks to Mark Bethwaite's lobbing efforts, it looks like the Great Grand Masters may have a full-rig option, so I'm looking forward to staying competitive in a full-rig rather than starting over again in a Radial.

I might be able to get to 175 lbs (79kg) and still be competitive in windy conditions (like Peter Shope) but isn't staying fit one of the benefits of sailing a Laser? It's certainly the best incentive that I know of.