Finding Something Positive to Say

By Doug
Larry Ellison was interviewed this week and he proudly called the America's Cup boats the fastest in the world being sailed by the best sailors in the world.

Before the series started, I predicted here and here that the America's Cup could be won by the team that does not have a major problem. In the Louis Vuitton final, the first three races have been won because the other boat failed to finish. Let's hope my prediction does not continue to be correct.  So far, the total lack of tactics and winning margins of minutes (when a second boat is able to finish) makes it pretty boring even for sailors.

Australia put its winner in a museum, but it's safe to say that this year's winner will not fit in a museum. While you can still see 12-meters being sailed on Newport and Sydney harbors, it's unlikely that any of the AC72's will ever be sailed again (hey team, let's rig up and go for a sail... who's got a 150' crane?) So they'll be mothballed after the series is finished.

In the interview, Larry Ellison admitted his disappointment from the lack of competitors. He even mentioned a preference for a return to the AC45's next time around. So it's easy to get a little cynical about the current series, the financial bath that San Francisco is taking, and especially the death of Bart Simpson.

So where is the positive? This is a very special moment in sailing history because we may not see anything like these boats again. It's a once-in-a-lifetime pinnacle in our sport, so enjoy because they're probably not coming back. 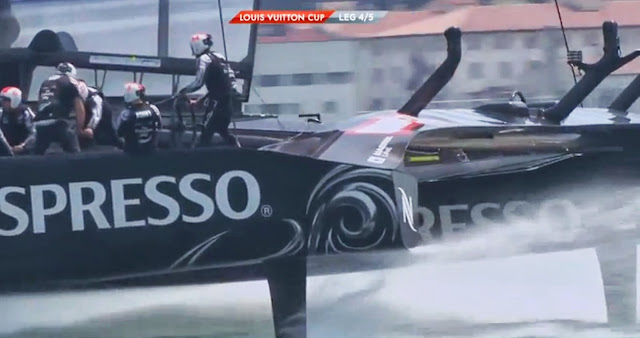