By Doug
As mentioned in a previous post, anticipating and using a persistent shift can have spectacular results. One of my favorite examples is at the end of the first beat in race 10 at the 1999 Laser Master World Championships. We were sailing at the north end of Port Phillip Bay just south of downtown . With the offshore northerly, the water was flat and the entire fleet had good boat speed. As we approached the first mark, the wind had shifted to the left and the entire fleet was on a lift.

Here's how things looked. Green was Peter Sundeim (SWE), a good guy and good sailor. He rounded first and went on to easily win the race. Look at this diagram and try to guess who rounded a close forth and went on to finish second. 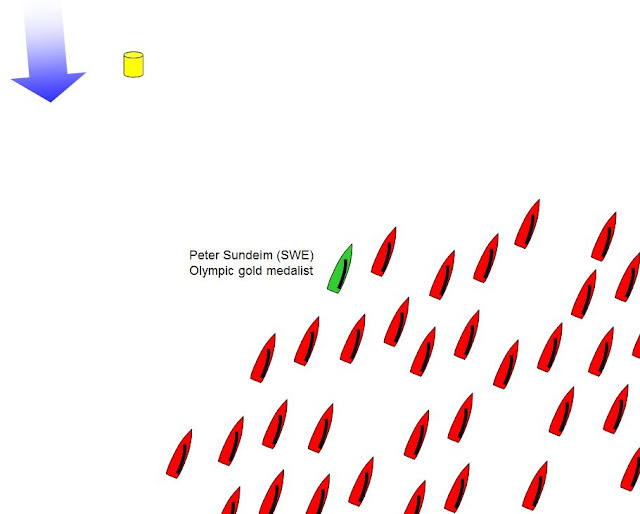 Before I show you the answer, here are the risks of approaching a mark on port tack in a good fleet. ITA has some problems that will cost it several places. 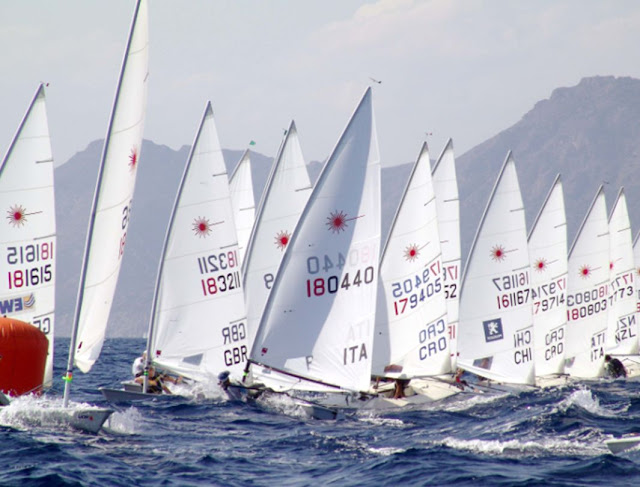 So it's a good idea to get to the starboard tack layline soon in a good, tight fleet.

I've asked the question about who rounded fourth in clinics. Here are some of the answers: 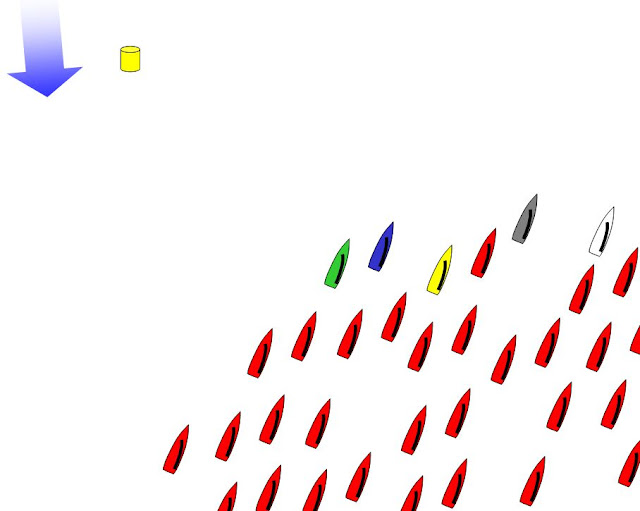 All of these answers make sense because it puts these boats safely on the layline.

I should explain that in this race, I was nowhere near the front row and was but back in the teens looking for a way to move up. The follow-the-leader-starboard-tack-layline option looked safe but was certainly not the way to move up. And rounding the first mark in the teens was not an option with Sundeim rounding in first place.

With the breeze shifting left, I decided that there was a good chance it was persistent for the remainder of the leg, so I approach from the left. My hope was that it would stay or continue to go left rather than shift back to the right, so I was the left-most boat on the inside of a big circle. 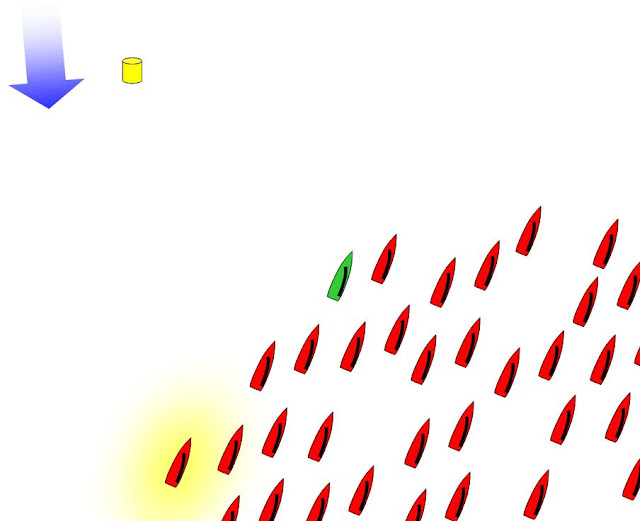 Approaching the mark, I remember looking through the window of my sail, seeing all the boats and thinking come on, come on, just hold for a few more seconds. And it did. Here's what I wrote in my journal that evening:

Approached the first mark on port with about 20 boats below and ahead. At the mark, got a slight lift with pressure and jammed in front of Schlachter. Rounded 4th, could have been 24th.

Phewwwww. Had the mark been further upwind, I would never have risked the port tack layline approach because the wind could have shifted back putting me in a position similar to ITA above. But with the windward leg ending, relying on the shift being persistent seemed worth the risk. One part planning and, yes, one part luck.

So, that's persistent shifts when they work. Here's the same scenario that turned out to be a what-was-I-thinking disaster.

In race 4 at Fred's awesome 2007 Easter Regatta, the fleet approached the first mark on a lift. Eric was leading in blue, and I'm green. We're inside most of the fleet, the wind is going left, and we're close to the mark. I said to myself, "This is going to be easy." 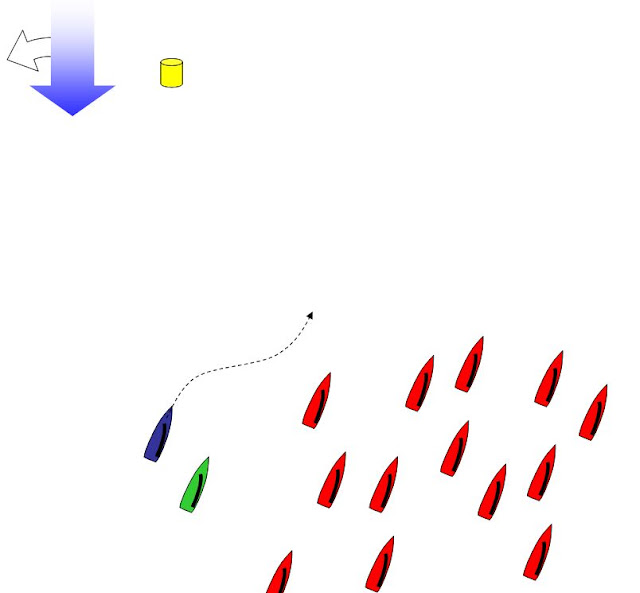 But before we got to the starboard tack layline, Eric bore off and crossed in front of me, as shown in the diagram. I thought, what's he doing? He just gave me the lead. I got greedy and continued.

Sure enough, we were close to shore and a big gust came off of it, along with about a 30 degree knock. We all tacked and I went from first to in the teens. You know, with all of the boats rounding and then on a screaming reach with Eric leading. And me still struggling to round the mark.

Two lessons learned: persistent shifts can be risky and you have to always look for clues for them not working, like a really good local sailor doing something unexpected. And secondly, never say to yourself, "This is going to be easy."