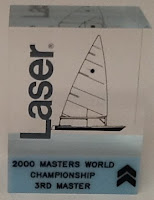 Started just below Bethwaite, charged off as he tried to roll me, which he could not do, so he tacked. There was more pressure below. They tacked, I kept going right. Rounded 10th on the run, went low, passed by 2 on the right. Finished 6th.